The Offload: Sean Reidy gets no lip service from officials 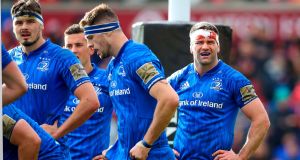 Fergus McFadden escaped a card after an apparent headbutt on Sean Reidy during Leinster’s defeat to Ulster. Photograph: Tommy Dickson/Inpho

“What have you seen?”

“14 blue has led with his head, where he connected I am not certain.”

Clancy then seeks guidance from Leo Colgan in the instant replay booth.

George: “It’s very hard to see anything there but I do see some unchecked aggression by 14 blue. From what I see he’s leaned into his opponent in an aggressive manner. We can’t see exactly where he made the connection. Both players remain on their feet so I think I’m going to restart with a penalty.”

George: “We’ve seen on the big screen there you’ve come into contact with your opponent in an aggressive manner. We can’t see exactly where the contact is so it’s just going to be a penalty against you.”

McFadden odd rebuttal was “he was grabbing me...”

George: “I’m going to have a word with him as well. You got to let me deal with those and the AR will deal with it as well.”

Reidy confirms that contact was made “to the face.”

George: “Well, no, we didn’t see that. We had a look on the screen and it is very unclear where the contact is. It’s just going be a penalty against them.”

Ulster captain Darren Cave interjects: “He got head butted in the face.”

Nobody panic, yet. The news: Conor Murray took the most innocuous bump imaginable in the warm-up before Munster versus Connacht.

The background: Murray’s neck issues led to all sorts of problems last year.

The fear: he slides him back into rehabilitation or worse.

The hope: it’s much ado about nothing. The concern, right now, is how distressed Murray seemed after gentle contact when Billy Holland nudged Jean Kleyn into him as the 30-year-old stooped to pass.

“It looks like he got his head snapped back a bit, looks a bit shook, he’s holding his neck so...” Eddie O’Sullivan offered as the slow-mo camera showed a visibly upset Murray covering his eyes.

Could be nothing. Could be everything. What we do know is conjecture dominated clarity on this topic before. Consider this: if the World Cup started tomorrow, Murray would be scribbled into the hors de combat column alongside Joey Carbery, Rory Best, Josh van der Flier and the definitely unavailable Dan Leavy. Ireland travelling to the World Cup without five front-liners come the September 8th cut off would represent good fortune considering the European and Pro 14 wars to come.

“He got a knock with the last breakdown of the warm-up. It happened literally seven or eight metres away from me. I got the medical team involved. He could have possibly played but we decided to err on the side of caution. It’s just very stiff at this stage, that’s all I can say.” Johann van Graan on Conor Murray’s suspected neck injury.

3 - Three year deal for Jerry Sexton at the Southern Kings in South Africa.

Sign of the times. Roll on the homecoming fixture.

Start of something special?

Two contrasting club finals in England and Ireland over the weekend; Hannah Casey’s Saracens beat Leah Lyons’ Harlequins in the Tyrrell’s Premier 15s final at Franklin’s Gardens while Railway Union - despite the Leinster Branch recently confining them to junior status - won their first All-Ireland League title by dethroning UL Bohs in a tense 13-8 victory in Donnybrook.

The contest was ultimately decided by Stephanie Carroll’s try, created by Daisy Earle’s super break, but UL Bohs may or may not hold private quibble about the game being blown up by referee Helen O’Reilly with 79:40 on the screen clock.

Anyway, standards weren’t a million miles away from the English version but the gap will definitely widen as Irish players go into summer hibernation as leading nations - USA, New Zealand, Canada, France and England - face off in the Super Series.

Rugby Players Ireland did make a progressive appointment last week by adding Ciara Griffin to their executive board. Still, there are no plans for a national under-20s team or upcoming training camps for the senior squad.

So, despite recent noises and posturing on Lansdowne road, there will be no immediate progress. Plans are afoot for a better funded, ring-fenced ‘Premiership’ style AIL of eight to 10 clubs come the 2020-21 season. This could be the start of something special providing the interprovincial and national Sevens agendas do not stand in the way of real club progress.