Nothing to choose between St Michael’s and Blackrock 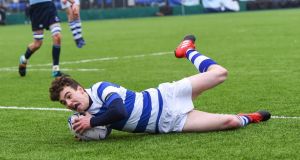 St Michael’s College and Blackrock College will have to do it all again after they couldn’t be separated at the end of an engrossing Leinster Schools Junior Cup final at Donnybrook on Wednesday.

In a low-scoring affair, St Michael’s had taken the lead with a first-half try from Jack Boyle. However, thanks to a 35th-minute five-pointer by Michael Lowey, a replay will now be required to determine the winner of this year’s competition.

Just five days on from their school’s Senior Cup defeat to Belvedere College, ‘Rock were eager to end the season on a high. However, it was Michael’s who broke the deadlock from a ninth-minute attack, when influential number eight Boyle powered over the whitewash after receiving the ball in a central position.

This was followed by a routine Chris Cosgrave conversion (his 15th in just three games), which offered Michael’s a strong platform to build on for the remainder of the half.

Yet, they found themselves on the back-foot for large spells, and disciplined defensive work was needed to ensure they remained in the ascendancy at the midway point.

However, ‘Rock eventually restored parity five minutes into the second period when a neat interchange between Ben Brownlee and Shane Murray allowed Lowey to touch down in the corner.

With outhalf Adam Dixon superbly splitting the posts from a touchline conversion, the momentum appeared to be with ‘Rock - but instead it was a determined Michael’s who posed the greater danger heading into the final-quarter.

They applied serious pressure inside the ‘Rock half, and an attempted close-range drop-goal by Cosgrave was blocked down on 50 minutes. Yet, as the final whistle approached, clear-cut opportunities were few and far between for and they ultimately had to settle for a re-match with the 50-time winners.