‘Concussion is a hot topic at the moment within rugby circles,’ says Leinster backrow forward 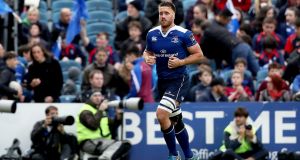 Dominic Ryan: forced to end his rugby career due to the impact of concussion. Photograph: Tommy Dickson/Inpho

News of Dominic Ryan’s enforced and premature retirement from rugby at the age of 28 due to concussion issues – revealed in The Irish Times last Saturday – has struck a particularly resonant chord in his former province of Leinster, for whom he played 113 times in an eight-year career before relocating to Leicester in the summer of 2017.

Ryan, who also won one cap for Ireland, played just five times for the Tigers, the last time being in a European Champions Cup game against Castres last January.

Jack Conan, a fellow Leinster backrower who had played alongside Ryan and known him for many years, said: “Firstly, it tough to see someone like Dippy have to retire at a young age. I would have spent a lot of years with him here. Before anything else, he is a fantastic bloke and was a great character around this place.”

“If you went to everyone, from lads who barely knew him to lads who had played with him for years, they would all speak so highly of him. That’s a testament to the character he was. It’s upsetting to see someone like him having to step away from the game at such a young age in the manner that he did.”

“Concussion is a hot topic, at the moment, within rugby circles. I know where we are in Leinster rugby, the medical staff the physios are so on the ball with regards to the HIA and the return to play protocols, sometimes concussions can go unnoticed, not through anyone’s fault. These things happen.”

“To be fair to the lads here, they’re probably the best in Europe and being on the ball for it. So I know they’ll keep on working to keep us safe, and I think the onus is on players to put their hand up more and be able to say ‘look, I’ve taken a knock here. I’m not okay here’. And we’ll keep growing and working on that aspect and be better at it.”

“Obviously it is a terrible shame for him,” said the Leinster head coach Stuart Lancaster. “I only coached him for a year and I actually thought for him given the number of quality back rows here it [joining Leicester] was a really good move for him, because he is a quality player.”

“It was more like circumstances, the fact he wasn’t getting more opportunity here. So to go to Leicester seemed and we actually spoke about it, seemed like a good move and it is a real shame that he has not been able to fulfil his undoubted potential as a player and the opportunities that England would provide him.”

Meanwhile the Leinster Women’s coach, Ben Armstrong, has called for the women’s interprovincial championship to be increased from three rounds to a home-and-away tournament comprising six matches apiece in advance of his side’s title decider with Munster Women at Energia Park on Saturday evening (kick-off 7.30pm).

Leinster will be favourites to reclaim the title from Munster after backing up their 17-0 win over Ulster with last Sunday’s 47-0 win away to Connacht, as a result of which they lead their Munster on points’ difference, but Armstrong would prefer there were another three rounds remaining.

“A second round of games on a home and away [basis] would be ideal. If you could play right up into the autumn internationals, barring the injuries, you’d be happy that the girls are well prepared to go into those and put their best foot forward for Ireland.”

The Ireland Womens team face their USA and English counterparts in November and Armstrong added: “I think the girls have been wanting that for a couple of years now. Maz [Reilly] is in our management team and I know that has been floated, but whether it goes that way we’ll wait and see.”

The province have decreed that any season ticket holders or supporters with ticket stubs to the preceding Pro14 game between Leinster and the Dragons at the RDS will be granted free admission to the women’s decider.