Cillian Willis concussion case due before court next year 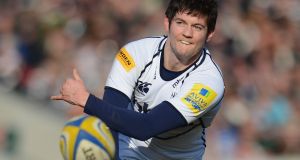 Cillian Willis’ case against the Sale Sharks is due to enter a Manchester courtroom in early 2019, almost six years after the former Leinster scrumhalf suffered a career-ending concussion.

In a landmark action for rugby union, Willis is the first professional player to sue an English club and two medics for clinical negligence related to brain injury sustained during an LV Cup match against Saracens on March 10th, 2013.

Dublin-born Willis – who also played for Connacht and Ulster in a seven-year career – believes Sale and the doctors wrongfully handled and incorrectly treated two head injuries sustained against Saracens.

Willis never played rugby again. He was forced to retire a short time later, aged 28, due to concussion-related problems.

“Playing with the wind Sharks were dealt an early blow when scrumhalf Cillian Willis appeared to be tackled high and was attended to by the medical team,” salesharks.com, the club’s official website, reported on the 21-16 victory over Saracens. “Thankfully he got to his feet and resumed.”

Willis received treatment in the first half, when he claims to have been concussed, but the Sale medical team deemed him fit to play on. Following a second head blow, after half-time, Willis was treated once more on the field but, again, allowed to play on despite, subsequently, claiming to be concussed. Nathan Fowles replaced Willis – “who was struggling after his earlier injury” – on 47 minutes.

Willis had been treated for concussion by Sale medical staff earlier that season. He is represented by McHale and Co with three separate solicitors – for Sale and the doctors – contesting the case.

It remains unclear if both doctors were fully employed by Sale Sharks at the time of treating Willis.

World Rugby and Aviva Premiership concussion guidelines, as of March 2013, were not adhered to, Willis claims. He did not leave the field of play during treatment for either blow. It is also unclear if he received treatment for the initial head injury at half-time.

The delay in court proceedings has been due to peripheral legal and contractual issues.

Willis, a cousin of Brian O’Driscoll, first came to prominence in Blackrock College before taking up a rugby scholarship to UCD. After representing Ireland schools, under-19 and under-21s (seven caps), he broke into the Leinster squad during the 2006/07 season.

Two years later, he joined Ulster (15 caps) and then Connacht (19 caps) before Joe Schmidt gave him a short-term deal to provide cover at Leinster during the 2011 World Cup.

That led to Sale offering him a two-year contract which ended prematurely due to repeated head traumas. The 33-year-old is currently coaching Greystones RFC.

Several professional Irish rugby players have been forced to retire due to concussion but, at present, none of them have taken the IRFU or provincial branches to court.

John Fogarty, the current Leinster scrum coach, and Dragons coach Bernard Jackman were both forced to retire in 2010.

Former Leicester Tigers and Leinster flanker Dominic Ryan is the most recent player to retire after struggling with knocks to the head. Leinster’s Kevin McLaughlin and Connacht centre Dave McSharry were also both forced to retire due to repeated concussions.

1 Gordon D’Arcy: If Farrell can tap into our self-worth, we’re all on a winner
2 Winds of change as Ireland name a refreshed team, picked on form
3 Nike Vaporflys won’t be banned but regulations will tighten
4 Who is Caelan Doris? Meet Ireland’s newest rugby star
5 Sean O’Brien 4.0 - Leinster starlet ready for Under-20 debut
Real news has value SUBSCRIBE