Blackrock’s array of attacking options look too sharp for Belvedere 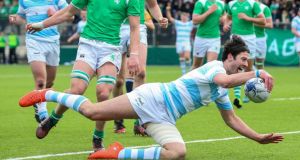 The final of Leinster schools rugby reaches a fitting conclusion with defending champions Belvedere set to be dethroned by this ridiculously talented Blackrock offering.

There will be serious pedigree on show. Patrick Paterson comes from a talented line of rugby men, on both sides of his family tree, and looks a sure bet to enter the Leinster academy where he should reinvigorate their scrumhalf stocks.

Neil Francis, capped 36 times for Ireland, schooled in Blackrock and an Old Belvedere club man, has an added interest in this game as nephew Alan is having a fine campaign in an enormously effective backrow, where he is joined by the imposing Johnny Fairley and the clever captaincy of Cian Reilly.

Then there’s Jordi Murphy’s cousin Andrew, reuniting his secondrow partnership with Charlie Ryan. The pair of them are squad’s vice captains.

Ryan missed the 34-8 destruction of Gonzaga – and Blackrock barely missed a beat – but it is hoped the promising lock’s shoulder will hold up under the guaranteed strain of this uncompromising Belvedere pack.

The aforementioned players are worth a visit to the RDS alone – stay on for The Legends match in memory of Anthony Foley or make your way over to Donnybrook for the Ireland versus England double header in under-20s and women – but this is a special Blackrock batch, coming off the back of four Junior Cups wins in a row, so hopefully the weather does not stymie the brilliance of fullback Tom Roche and scything breaks by centre Liam Turner.

Belvedere will welcome the breakdown battles with captain Max Kearney and imposing number eight Ruadhán Byron their most physical teenagers.

Be sure, Belvo will not roll over. Far too much talent. If Blackrock allow them to get a foothold in their territory, outhalf David Hawkshaw has the good sense to put big number 12 Cian Walsh galloping over the gainline.

Then there is Hugh O’Sullivan, whose talent has lit up schools rugby for the past few years. Belvedere, under coach Phil Werahiko, play him at 15 but he is supposedly a better scrumhalf. However, in Paraic Cagney Belvedere have a more than efficient nine so O’Sullivan running gifts are utilised from the back field.

Gonzaga did cause Blackrock some trouble when attacking in the wide channels. Werahiko couldn’t but notice this.

The contest may prove as simple as O’Sullivan against the place kicking of Blackrock outhalf Peter O’Reilly.

But that’s unlikely. Both teams love scoring tries too much. Blackrock have another advantage in that their bench, especially big centre Ross Deegan and flanker Michael McGagh, proved in the semi-final that they can make an impact.

Belvederians will not warm to this preview. They are the champions and this is their third straight final. They do have enough quality to retain the title while Blackrock haven’t scaled the mountain top since 2014. It’s just that Blackrock’s array of attacking options appears superior, and enough to take the cup south of the Liffey for a 69th time.

Last time Blackrock lost a final was to Belvedere on St Patrick’s Day in 2005. Both teams ended up producing a load of professionals and five internationals with Blackrock’s Vasily Artemyev still representing Mother Russia while Luke Fitzgerald and Ian Madigan were joined in green by Cian Healy and Ian Keatley.

Belvedere prevailed in a cracking duel, 16-10. Similar levels of intensity and the same amount of future pros looks entirely possible.

Leinster find a performance right up with their best to see off champions Exeter 20:19
Ireland make loud statement of intent as they crush Wales in Cardiff 19:48
Kieran Dowell goal moves Norwich within two points of return to Premier League 18:50
Rachael Blackmore caps historic season as Minella Times wins Grand National 19:08
Jürgen Klopp says Trent Alexander-Arnold has nothing to prove 18:26
Crossword Get access to over 6,000 interactive crosswords