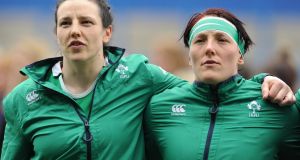 In a mundane way the week of Irish captain Paula Fitzpatrick encapsulates what Ireland face today in Donnybrook. She returned to Ireland late last Saturday night after beating Wales to set up tonight’s Grand slam game against England.

On Sunday she had the day off and on Monday and Tuesday went to work in her lecturing job in Sports Science at Carlow IT. On Wednesday she came back to Dublin to do a double training session in Clontarf and hit the team hotel in South Dublin about 48 hours before the team faces England.

The World Champions come to Ireland as no less than probably the best team in the world. Alongside New Zealand the two countries are unquestionably the Uber powers of the sport.

The English are all contracted players and their week would be how any professional athlete’s week would be with rest and recovery, afternoon naps and taking a luxury view of tonight’s match as a possible dry run against the hosts with the summer’s World Cup in mind.

England are outlandish favourites, although, Ireland’s traditional strength has been to ignore that and face each meeting inch by inch, second by second.

“Back in November we lost to them by two points so it’s not a huge rift between the sides,” says the Irish captain illustrating that sport and the act of competing is in itself a leveller.

But nor is she blind to the reality of the English team. With 182 points from four games and a capacity, if they are allowed to express it, greater than most sides in the world, Ireland needs a perfect game.

The high wire is the breakdown and if Ireland gives inches, England will take yards. One or two missteps and the team could fall a long way.

“I think the girls know what’s coming,” she says. “We have faced the English a number of times so we are well versed in what is going to be coming down the tracks at us.

“While they are professional in terms of pay to play and they can focus wholly on it, we would like to think of ourselves in terms of that standard, the way we train and the attitude we have . . . not necessarily the financial aspect but in terms of the mindset.”

Ireland, she says, must believe in themselves against an auld enemy averaging over 45 points a match. Ireland, she says must first stop them dead. In her voice there is a commitment to that.

A positive is Ireland’s defence have only leaked seven points more than England’s 28 points over the campaign and in matches like these you look for little upsides.

“Yeah it would be nice wouldn’t it?” she says of winning the match and Grand Slam. “I think Irish people in general like to be underdogs. So, no it’s not a bad position to be in.

“But I don’t think we are way off by any stretch of the imagination and I think bringing them to Donnybrook, Paddy’s night, a huge crowd . . .”

Some defiance there. Daring to believe.