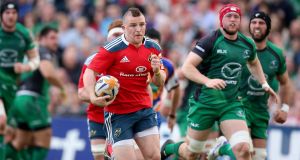 Looking back on that one match I played with a mohawk I’m not quite sure what I was thinking. Photo: Billy Stickland/Inpho

Despite the graded easing of restrictions, as things stand hairdressers and barbers won’t be allowed to open again until July 20th. That’s another 11 weeks away. But I’m lucky, I’ve a bit of a microphone head. It’s not a scissors job, it’s a blade job. We can shave it. So Liz has been my hairdresser during the lockdown. And we went with a mohawk. There are no rules anymore!

At one stage I used to shave my head and then there are also a few damning pictures out there of me in my first season with Munster, 2013-14. These were back in the days when my housemate Ian Keatley did my hair.

One day Keats and I decided I’d go for a mohawk. We went for it really aggressively. I played one game against Connacht and, to be honest, it’s horrific. I don’t know how I had the balls to actually go out onto the pitch. It’s astounding.

Thankfully, this mohawk is not as aggressive. A good few of the Munster players get our hair done in Retro Barbers and I bought a razor off their owner, Frank, from his online shop and had it delivered. Liz chatted with him for a little advice and did my hair for the third time during lockdown this week. In fairness, she’s done a good job!

Actually Liz has been upskilling big time. We do our weekly shop every Tuesday and as we have a good few cookbooks at home, for the last five weeks we’ve each picked a meal that we haven’t cooked before. We’re terrible for cooking the same things on repeat.

Come Dine With Me twice a week!

I have to admit she’s definitely winning. She’s been very adventurous, making all sorts, including sushi and she does a chicken and broccoli bake which is unreal. Savage.

With the nice weather, we’ve also been making good use of the barbecue whenever we can. Unlike Conor Murray and a few of the boys with their Kamado Jo barbecues, we have a Webber. And I had a big night with the barbecue last Monday. A big night.

The steaks just went really well. I did them with sweet potato fries in a recipe I saw online. You soak them in cold water for a period of time to get rid of their starch, then throw them in the pan with sunflower oil on a low heat and cook them through before drying them in kitchen towel. Then you reheat the sunflower oil to 180 degrees and put the fries back on to sizzle them.

It was top class, if I say so myself, and we had enough left over for steak sandwiches on Tuesday which was even better. I have since acquired a thermometer as well, so I’m slowly but surely getting all the gimmicks to go with the barbecue.

Training has been pretty good. I’ve found the right balance between training hard and maintaining variety. This is the seventh week and it was becoming repetitive, even manipulating the sessions with the same equipment. But the Munster strength & conditioning coaches have been very supportive. They are happy for us to change things up and they’ve sent on new or changed programmes.

They’ve also said that if I feel like doing one particular thing on a given day, then go with it, and don’t worry too much about it. That takes the anxiety out of it, or any fear that you might not be doing the right things in training.

Normally, we would be on a specific schedule when we go to the gym in the High Performance Centre in the UL. We’re told what to do and that’s what we’re used to, which was the route I took at the start - making sure I did everything exactly by the book. So I’m learning not to be guilty or anxious if I veer away a little from doing things as prescribed in a weights session. Just go with the flow.

Overall, I’ve had the odd day when you just feel like you don’t know what’s going on. Whether you wake up on the wrong side of the bed or something in your day leaves you scrambling and felling like you’ve taken on too much. It’s hard to pinpoint what it is.

I’m so used to having specific targets. Matches. Making goals and then chasing after them. Trying to get into the Irish starting team. Looking ahead at tours. Now, not knowing what’s ahead is a bit weird. At times your mind goes wild and you’re questioning what’s ahead. But I’d say 90 per cent of the time I’m all good.

This is what it is, and take the positives out of it.

In recent years, focusing on the day to day has worked well for me. Whenever you focus your attention on short-term goals it helps you from not overthinking things which are in the longer term.

I’d been lucky enough to link up with Conlons BMW Limerick during the Six Nations but, as we then went into lockdown, I haven’t had the chance to drive the car much over the last two months.

This week, myself and Liz both got our cars washed because, not having moved from their spots, the birds had left a few presents.

It’s the small things we’ve all come to miss, but I’m really looking forward to driving down to the west coast of Clare when this is all over.