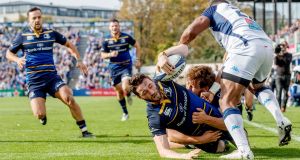 A try last weekend on his European debut and three tries against the Cheetahs last month shows Barry Daly appears to live the maxim of grasping every opportunity that arises.

After all, it is not the first time the Leinster winger has been offered a chance in the province and decided to take it.

Initially over looked in the Leinster sub-academy, Daly could have gathered all the pros and cons of professional rugby and decided international Sevens rugby and business were his future.

But when Luke Fitzgerald was forced to retire, Daly answered the call. For all of the attractiveness of such an opportunity to an ambitious player , Daly had to weigh up playing professionally with Leinster against a career in accountancy and KPMG. Solid future versus golden offer.

The question was would Cap 2 accountancy exams contribute as much to his wellness as using his blistering pace to score tries.

“Last year I was playing games, and I was going in ‘ugh, I don’t know... I’ve learned my stuff, but I’ve never done it before at this level,” says Daly.

“A couple of years ago I was watching these guys on the couch. Now I’m playing with them every day. It’s amazing. I feel like I’m going well, so I’m happy.”

And Daly’s pace is everything. The GPS devices players wear in their shirts have tagged him as the fastest player in the Leinster squad. It has been reported that he has touched 10.5 metres per second, which is 37.8 kph.

Sustained that would be less than 9.5 seconds over 100 metres, faster than Usain Bolt. Of course it is not a sustained measure but it does reflect what level of fizz the 25-year-old has in his legs.

“It is true,” says Daly. “We have little GPS’s that track our speeds. It was just chasing back a try that we conceded. Athletically I’m there, I’m doing well. I feel strong, I feel quick and it’s good to put that mark up there. I did a little bit of long distance running when I was young.

There is a myriad of other aspects to rugby but with his try-count mounting and the trust of Leo Cullen, Daly is finally walking the same ground as others he played with at the sub academy, Jack Conan, Cathal Marsh, Tadhg Furlong and Luke McGrath.

“I always thought I was good enough to play at the top myself,” he says.

“At the same time, I always thought there were loads of guys good enough to play, who are playing in the AIL. It’s just whatever way it works.”

An overnight sensation after five years.