Rassie Erasmus: ‘There is a great character coming to Munster’ 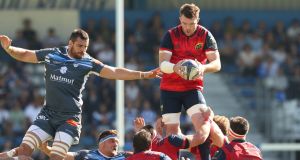 No harm to have an incoming new “head coach” in Johann van Graan to take the focus off Munster’s performance in Castres.

Avoiding defeat in the south of France can at least be painted in a positive light.

“Look, if you took the last 10 minutes certainly relief would be a word I’d use,” said Peter O’Mahony, after nobody questioned his team-mates work rate.

“Over the 80 minutes we’d be disappointed to be honest with you. We put ourselves in a fight which is the number one thing to do when you come to places like Castres in France away from home in your first game of the European Cup and it’s always a difficult, difficult task and I’m delighted with the two points.”

O’Mahony saw improvements in the team’s discipline but stagnation elsewhere.

“I think we need to exit better and we’re going in the right direction.”

But the overwhelming interest in Munster has to be the imminent arrival of the 37-year-old Johann van Graan (presumably having a well earned break after a tumultuous few seasons overseeing the Springbok pack).

“I know him really well,” says Rassie Erasmus, possibly the first and last ever Munster director of rugby. “The only involvement was when I was asked for my opinion, like with all the other guys, like Dave Wessels [who Munster lost to the Queensland Reds]. That’s where my involvement stopped.”

Erasmus did give van Graan the ultimate backing a week or so ago when saying that he wanted to work with him. In South Africa, where he is returning to sort the shop out, and not Limerick.

“Even his leaving South Africa, that was pretty well done by Munster to get him out of there because I know he is highly-rated there and I made sure I wasn’t involved.”

Got it? Definitely. Not. Involved.

“I have only called him, I think it was on Friday, to say congratulations.”

Erasmus has the unenviable task of planning a clean exit from Munster (where he is hugely respected, even loved, having made a massive impact in a very short time) and getting home before his contract – and we are only quoting his agent – begins on November 1st.

There is the summer tour of Europe to sort out. It is not beyond the realms of possibility that Erasmus and Jacques Nienaber are at the Aviva Stadium when the Springboks play Ireland on November 11th. (Not in the coaching box)

“Listen, he will bring work ethic, a hell of a lot of experience and he is used to pressure situations. He is a guy that coached two weeks ago when they lost 57-0 against the All Blacks and he was one of the guys that tried to turn it around the next week [when South Africa only lost by a single point to New Zealand].

“He has won three Super Rugby titles as an assistant coach [of the Bulls]. He has experience across the range, from attack to defence and he is a very good analyst. He is a wonderful attacking coach and he will add a lot to the lineout work that Jerry is doing. He is the master of all, if I can put it that way.”

All told, van Graan does not sound like a 37-year old-coach.

“Ya, because he started coaching at 23 or something. He grew up next to the Bulls rugby field and he worked with guys like Fourie Du Preez and Victor Matfield and those kind of guys for years and years.

“There is a great character coming to Munster.”

Still, van Graan’s lack of head coaching experience – he has none – makes it crucial that Munster beat Racing 92 next Saturday at Thomond Park.

“We don’t necessarily have to win next week. We have to try and win next week. We are trying as hard as we can. If he comes in here after two losses he is the type of guy to sort it out. That’s why he is brought in here. We would like to have him in a nice position, a nice soft landing. We will try our best, like we did today, and we got a draw.  He will get stuck in there and find a way. He is a really good coach.”