Unowhatimeanharry can prove age no hurdle in the Stayers' 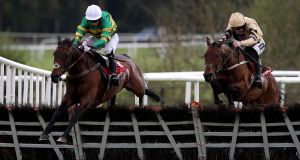 Unowhatimeanharry: was expected to win this last year and didn’t. If he comes back to his very best, that could be good enough this time. Photograph: Ryan Byrne/Inpho

If JP McManus’s 10-year-old stalwart does manage to beat his juniors it will highlight what a difference a year makes.

In 2017 Unowhatimeanharry came to the Stayers as one of the festival ‘banker’ bets, winding up backed down to odds-on favouritism.

The gamble failed though as at no stage of the race did he look entirely happy. Noel Fehily produced him to challenge but it was an effort that faded up the hill behind Nichols Canyon and Lil Rockerfeller.

Fehily was on board again over a month later however when Unowhatimeanharry reversed that form with Nichols Canyon at Punchestown.

The Cork-born jockey is back on the horse here as Barry Geraghty has opted for McManus’s other hope Yanworth.

Geraghty’s call is unsurprising since Unowhatimeanharry has failed to meet expectations in his last two starts, the last of which was behind Sam Spinner in December’s Long Walk.

That performance propelled Sam Spinner to the top of the betting for this race and at six the horse representing the ‘little guy’ home combination of Jedd O’Keeffe and Joe Colliver certainly has a suitable age-profile for this task.

Since the Stayers was introduced in its modern guise in 1972 it has been won 15 times by six-year-olds including giants of the game such as Big Bucks and Inglis Drever.

In contrast horses in their double-digit dotage have emerged best just once, the 11-year-old Crimson Embers doubling up in 1986 four years after first winning it.

Those were days recalled by old-timers as when soft ground at Cheltenham was proper gluepot soft and the impact of the elements on this year’s festival could yet see a similar scenario emerge again.

Action switches to the New Course on Thursday and although there will be fresh ground the prospect of overnight rain really could stress the stayers part of the race title.

Whether that means dogged grit can trump youth will be interesting but it’s not hard to suspect some ‘been there – done that’ experience can only be a help.

Unowhatimeanharry and his fellow ten year old The New One boast experience in spades and it’s the McManus second-string in particular who looks to possess the dour stamina required.

He has over ten lengths to make up on Sam Spinner from Ascot but his trainer Harry Fry is in good form now and has had time to freshen the horse up.

Whether Yanwoth or his old rival Supasundae will relish very testing conditions is debatable but Bacardys should be okay on it while Sam Spinner could still be improving. But the big field shows how open many feel this championship is.

Unowhatimeanharry was expected to win this last year and didn’t. If he comes back to his very best, that could be good enough this time.

Day Three opens with the JLT Novices Chase and Willie Mullins’s pursuit of four in a row in the Grade One prize.

Two of the previous trio, Black Hercules and Yorkhill, carried the same Graham Wylie colours that Invitation Only does and the horse can boast a top-flight placed from behind Monalee last month.

It is the mare Shattered Love who can boast top-flight winning form however and the decision to bring her – and her 7lbs mares allowance – to this race rather than the RSA looks a significant one by Michael O’Leary’s Gigginstown Stud team.

Shattered Love did after all win that Christmas Grade One at three miles. Clearly she stays further than two and a half. However a wide-margin victory prior to that over two miles on heavy going suggests she’s far from a one-dimensional stayer.

She’s also in possession of the sex allowance. O’Leary strongly believes it is wrong for mares to get it in Grade One races. He has made the point even after some of Apple’s Jade’s victories. The Ryanair boss could end up making it again from the winners’ enclosure after this outing.

Laurina isn’t even top-rated officially for the Grade Two Trull House Mares Novice Hurdle. That honour goes to the prolific Maria’s Benefit. Yet if Willie Mullins’s runner doesn’t justify short odds a sizable chunk of the Cheltenham crowd is likely to be left feeling very sorry for themselves.

Tramore isn’t normally the launchpad for festival hotpots but Laurina won her maiden there before then hammering the smart Alletrix in a Grade Three at Fairyhouse. Even some sloppy jumping on that occasion couldn’t disguise an impression of rare power and potential.

There’s no knowing where that potential could wind up and there appears to be general agreement among the Mullins team that Laurina is their banker of the week.

Squouateur started favourite to win last year’s Kim Muir only to lose his rider at the third last. He’s back for another crack at the amateur prize and his jumping will be put to the test once again. Along with the 2016 Pertemps winner Mall Dini he is part of a strong Irish team.

An alternative may be the ex-Gigginstown horse Band Of Blood. Now with the Grand National-winning trainer, Dr Richard Newland, the ten year old has looked a rejuvenated proposition in his last two starts.