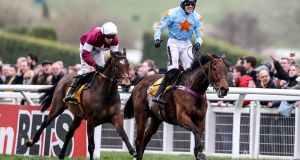 2:10 – Mine Now/Dadsintrouble The three Irish-trained JP McManus runners are just the type to be overbet at Cheltenham on the perception they are aimed at the meeting all season; that isn’t a great argument for backing a horse at the Festival when it applies to 90 per cent of the field! It might be better to take two big-priced darts. Mine Now beat Glenloe and A Great View on merit at Christmas, goes well fresh and the rain has come for him. Dadsintrouble is even darker but has some good form last spring at Aintree, shaped much better than the result last time and failed chasers have a decent record in the race.

2:50 – Sub Lieutenant Soft going is optimal for Un De Sceaux at the minimum distance but perhaps not over this extended two-and-a-half miles; he was tying up in the finish last year on good ground and stayers like Cue Card and Balko Des Flos are unlikely to grant him an easy lead. Sub Lieutenant looks underrated by the market which might be down to his being a late confirmation. A specialist at this trip, he should have been a closer second in this last season and a break since a hard race in the John Durkan is no bad thing.

3:30 – Sam Spinner Despite attracting its biggest field since 2008, the Stayers’ Hurdle looks heavy on quantity rather than quality and Sam Spinner stands out on this season’s form. There were two concerns with him coming into the meeting – faster ground and his jockey’s lack of experience at the track – but the first has been rendered moot by the rain and the second seems too heavily factored into his price.