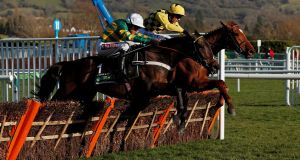 By the end it looked like slow-motion chess but Buveur D’Air had the Cheltenham Grand Master Barry Geraghty on his back to become the 13th horse to retain the Unibet Champion Hurdle crown.

At the end of a gruelling heavy ground slog the JP McManus-owned 4-6 favourite had a neck in hand of Willie Mullins’s well backed second-string Melon (7-1) with the 25-1 shot Mick Jazz in third.

It was a record seventh Champion Hurdle in the last 20 years for McManus and a seventh too for Buveur D’Air’s trainer Nicky Henderson.

Injury prevented Geraghty from riding Buveur D’Air in the race a year ago but McManus’s number 0ne jockey was back on board this time. All the famed big-race cool that had given him 34 previous festival victories was required to give him his own third Champion Hurdle title.

Tactical races are often synonymous with a slow pace but this was a fast run Champion Hurdle that managed to squeeze plenty nuance in too.

Any hopes Ruby Walsh might have had for an easy solo in front on the 2015 champion Faugheen were dashed by Buveur D’Air’s 100-1 stable companion Charli Parcs keeping him company in the early stages.

Other hopes that cheek-pieces might transform Faugheen were also a busted flush coming down the hill. Instead it was his one of his stable companions Melon who travelled best of the Willie Mullins team.

Some classic jockeying for position on the run to the second last wound up with Melon securing a dream run up the inner and those that backed him from 14-1 to half those odds briefly looked set to collect as he took a brief lead.

But if Geraghty is famed for his big-race acumen so is his strength in a finish. Both came to the fore up the hill. The legendary Meath jockey nursed Buveur D’Air to 100 yards from the line and was last to go for his whip. And the saying has always been the last to reach for the whip wins.

“He (Melon) arrived on the scene and it was the first I saw of him. I thought going round the bend I was in trouble but once he didn’t get away from me I was happy I always had him covered,” Geraghty explained afterwards.

“There was nowhere to hide and the ground made it the ultimate test. He won it the hard way. I thought the runner up was coming to beat me but my fellah is battle hardened. He’s been flashy all season because he hasn’t had to deal with much but he was a scrapper today,” he added.

”I thought we had it all to do after the last but I was hoping Barry’s strength might just get us through,” McManus admitted while Henderson added that Buveur D’Air could try and follow up again in the Aintree Hurdle next month.

Mullins indicated Melon is likely to skip Liverpool and wait for Punchestown and added: “It was a terrific performance that vindicated what we thought of him. He’s going to improve.”

Whether at ten Faugheen can do the same is unlikely but Ruby Walsh reckons he will need a longer trip to return to Grade One winning form.

”Like everyone, as we get older we slow down a bit and he raced like a three mile horse there,” Walsh reported afterwards.

Buveur D’Air will be eight next year and in theory at a physical peak for a National Hunt horse. Just five horses have ever won the Champion Hurdle three times. Istabraq was the last. The latest McManus superstar is already 5-2 to join the select handful.