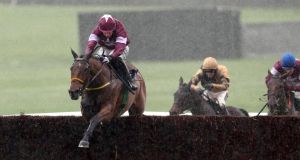 Road To Riches, ridden by Bryan Cooper, clears the last fence on his way to victory at Clonmel in November in what was his sole start to date so far this term. Photograph: Ryan Byrne/Inpho.

It is 20 years since Imperial Call won the then Hennessy en route to landing the Cheltenham Gold Cup six weeks later and Road To Riches is a hot-favourite to pick up at least the first leg of that rare double at Leopardstown on Saturday.

Noel Meade’s star heads five horses from Michael O’Leary’s Gigginstown Stud team – half of the ten entries overall after yesterday’s forfeit stage – left in the newly-titled Irish Gold Cup and is uniformly odds-on to provide the Ryanair boss with a third win in four years in the €150,000 highlight.

The O’Leary team also includes the 2013 winner Sir Des Champs, one of three Willie Mullins-trained entries, while Carlingford Lough and Foxrock, who fought out a memorable finish last year, are set to again clash in the centrepiece of the only programme in Ireland to contain four Grade One races.

Of the three other top-flight races, the Gain Spring Juvenile Hurdle, featuring the Triumph Hurdle favourite Ivanovich Gorabatov, and the Deloitte Novice Hurdle, which has thrown up legendary names such as Brave Inca and Istabraq over the years, in particular look likely to supply significant Cheltenham Festival clues.

However the feature race’s significance as a Cheltenham Gold Cup trial pales somewhat in comparison.

Just Imperial Call and Jodami in 1993 have gone on from a Leopardstown victory to also land steeplechasing’s ‘blue-riband’ although Lord Windermere emerged from an unplaced finish behind Last Instalment two years ago to score at Cheltenham the next month.

Sir Des Champs proceeded to finish runner-up in the 2013 Gold Cup, a position Florida Pearl also filled in 2000 on the back of his second Hennessy success. Dorans Pride ran third to Cool Dawn at Cheltenham after winning at Leopardstown.

With Willie Mullins opting to skip the race with the Gold Cup favourite Vautour, as well as another of Gigginstown’s prime Cheltenham hopes, Don Poli, the way looks clear for Road To Riches to cement his credentials for another tilt at steeplechasing’s ultimate prize.

Road To Riches missed out on the Lexus over Christmas but Meade is happy he’s back in top form after his weekend workout. “He was absolutely bombing and came back in with a big smile on his face and his ears pricked,” he reported. “The little blip at Christmas was just a cold and I had to give him antibiotics for a couple of days to clear it up.”

Bryan Cooper is almost certain to team up with the favourite leaving opportunities for riders on board Gigginstown’s four other hopes, which also include First Lieutenant, Wounded Warrior and Valseur Lido.

The latter is next best among Saturday’s entries in Cheltenham Gold Cup betting at 50-1 with both the JP McManus owned hopes, Carlingford Lough and Gilgamboa, on 66-1.

Willie Mullins has five of the nine entries in the Deloitte, a race he has won in each of the last three years, including with subsequent Supreme heroes, Vautour and Champagne Fever. The champion trainer can choose this time from an elite handful that includes the Grade One pair, Yorkhill and Bellshill.

However Gordon Elliott’s Tombstone, runner-up to Long Dog over the Christmas festival, initially marginally edged bookmaker prices for the two and a quarter mile event.

Mullins is also heavily represented in the Grade One Flogas Novice Chase with seven of the dozen hopefuls left in. They include Black Hercules and Outlander as well as the duo, Pont Alexandre and Roi Des Francs, who fought out a tight Grade Two finish at Naas last time.

Ground conditions at Leopardstown are currently “soft” with “soft to heavy” patches although there is a largely dry weather forecast for much of the rest of the week.

Irish squad in the dark as clouds hang over Six Nations 06:00
Weekend hurling previews 06:00
Three Munster Academy players selected for Pro14 clash with Scarlets 06:00
Friend warns Connacht need to be at their best in must-win Southern Kings clash 06:00
Getting behind the rotten core of rugby with Dan Tuohy 06:00
Here is your handy guide to sport on television this week