‘The way the business world works had to take its course’ 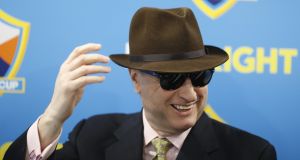 Rich Ricci: “I’m delighted and really grateful to BetVictor that we have found a way to honour these bets.” Photograph: Alan Crowhurst/Getty Images

Rich Ricci, the former chairman of the defunct internet bookmaker BetBright, said on Friday that he is “delighted that we have found a solution”, which guarantees that all outstanding ante-post bets with the firm will now be honoured by BetVictor.

BetBright sold its technology platform to rival firm 888.com in early March for £15 million, but its outstanding liabilities on bets already placed with the firm were not included in the deal. While 888.com agreed to honour bets on the Cheltenham Festival in mid-March, it declined to take on ante-post bets on the football season, which were believed to have a potential total liability of around £1 million depending on results.

Bets that were declared void with stakes returned included those placed by one BetBright customer with a potential return of nearly £27,000 for an initial stake of £400. The customer had a £100 each-way double on Luton (14-1) and Lincoln (10-1) to win League One and League Two respectively, and a £100 Trixie (three doubles and a treble) on Lincoln (4-1), Leeds United in the Championship (5-1) and Arbroath, now the runaway leaders of League One in Scotland, at 6-1.

Both Luton and Lincoln are now priced at around 2-9 to win their divisions, while Leeds are still competitive in the Championship at 11-2. The book has effectively closed on Arbroath.

Ricci, a leading owner in National Hunt racing, attracted fierce criticism after BetBright’s closure was announced, but now appears to have been working behind the scenes to get a fair deal for the firm’s customers.

“The way the business world works had to take its course,” Ricci said on Friday, “and there were technical issues why I couldn’t step in myself, not the least of which is that I’m not a bookmaker and so I needed a partner. So I’m delighted and really grateful to BetVictor that we have found a way to honour these bets.

“It was an unusual transaction and when these things happened, the directors had to take a decision in the interests of all the liability holders. It was a process that had to play out and I’m delighted that we have found a solution.” – Guardian