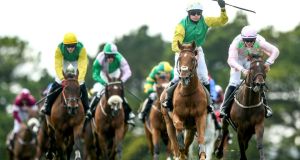 What had been a mostly forgettable festival week for Tony Martin burst to life in the richest possible fashion as Quick Jack provided the Co Meath trainer with back-to-back Guinness Galway Hurdle victories.

For good measure Martin also saddled the third, Ted Veale, and could even claim a tantalising ‘what if’ element to the outcome of Ireland’s most valuable jumps race as last year’s winner, Thomas Edison, took a crashing fall at the last when holding a slight lead.

If that left Barry Geraghty having to cope with more Galway Hurdle frustration, the outcome was a sweet one for Youghal-born jockey Denis O’Regan who first announced his big-race talent by winning the Plate on Ansar a decade ago.

“It means everything. This is the race I’ve wanted to win ever since winning the Plate ten years ago,” the British-based rider said after Quick Jack completed his own double, having won the big amateur prize at the festival last year.

For Martin it was a particularly sweet success. Widely touted as the most likely to threaten Dermot Weld’s famous Galway festival hegemony, Martin had endured a blank up to the €300,000 highlight although he argued he wasn’t particularly worried about since the bulk of his major hopes hadn’t run.

Yet again, the handicap master was proved correct as O’Regan arrived motionless at the crucial last flight and only needed to push Quick Jack out to the line to hold off Max Dynamite with Ted Veale, also carrying owner John Breslin’s colours, plugging on for third.

“I don’t know what would have happened if the other fellah hadn’t fallen; we’ll never know. But for a horse who’s had a lot of bad luck, that’s the first time he’s fallen so it was his own fault,” Martin said.

Quick Jack has been big handicap stalwart on the flat and over hurdles in recent seasons and his trainer added: “His form speaks for itself. He’s been very consistent and just got chinned in the Chester Cup. We try to mind him and not run very often but you’d imagine he’ll have all the same options again, races like the Cesarewitch.

Top jockeys can also put in inspired displays and earlier Declan McDonogh secured a dream run up the inner to pinch the Listed Corrib Stakes on the line from Tested.

That gives Mullins two more winners than Weld who drew a second blank of the week although the points system employed to decide the leading trainer award leaves that contest still wide open.

“We don’t really buy horses for the flat. We get sent them. I didn’t even dream of her winning. I thought the track mightn’t suit and she’s very temperamental,” said Mullins. “She’s herself – and if you leave her be herself, she’s okay!”

Gangster proved to be a rare odds-on Mullins flop in the novice hurdle which saw Sandymount Duke secure four-in-a-row with an all-the-way victory that provided Jessica Harrington with her own third winner of the week having previously landed the mile handicap courtesy of Princess Aloof.

No non-runners meant Harrington’s Modem failed to get a run in the big hurdle but Sandymount Duke, bred and owned by the Rolling Stones guitarist, Ron Wood, still looks a jumper of some potential.

“He’s won four and I’ve no idea how good he is,” admitted Harrington. “All I know is he’s come a long way in a year because a year ago I was ready to give up on him. But he’s actually won easy there. The more they came at him the more he found.”

Harrington’s own odds-on favourite, Rock The World, found Sizing Platinum too good however in a novice chase that saw the Henry De Bromhead-Johnny Burke team add to their Plate triumph with Shanahan’s Turn.