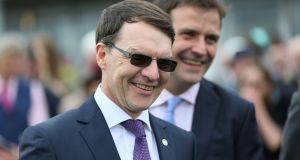 Aidan O’Brien: will assemble a powerful team or runners for Royal Ascot where he is odds-on to be top trainer once again. Photograph: Brian Lawless/PA

Aidan O’Brien is a long odds-on favourite to land Royal Ascot’s leading trainer award for an eighth time next week but could bid for more classic glory prior to that in Sunday’s French Oaks.

The Irishman has kept open the option of giving Rhododendron a third stab at classic glory in the €1 million Prix de Diane this weekend.

Runner-up in both the English 1,000 Guineas and the Epsom Oaks, Rhododendron may take the intermediate extended ten furlong route in Paris after being left among 24 fillies remaining in the Diane after the latest forfeit stage.

Her stable companion Roly Poly – runner-up to Winter in the Irish 1,000 Guineas last time – is also still in a race which has just a single Irish-trained winner on its distinguished roll-of-honour, the Seamus McGrath-trained Sweet Mimosa in 1970.

O’Brien was out of luck with both Ballydoyle and Coolmore in last year’s Diane but is keeping his options open with Rhododendron and said after her Epsom second to Enable: “She could go for the Pretty Polly or we could have a look at the French Oaks.”

Some bookmakers however have already installed Enable’s stable companion Shutter Speed as a 4-5 favourite for the Chantilly classic with the unbeaten Terrakova  next best.

The latter is a daughter of the triple-Breeders Cup heroine Goldikova and trainer Freddie Head is anticipating a big effort by his filly at the weekend.

“I think she is very good. She’s got a good cruising speed but also she can quicken,” the Frenchman said.

“I know the family well. They are not too precocious so I didn’t want to over-face her last season. For the moment ten furlongs is her trip. But she finished off her last race very strongly and I’m confident she’ll stay a mile and a half. She’s smart,” Head added.

O’Brien is building up his hugely powerful squad for Ascot next week when superstar names such as Churchill, Caravaggio and Winter will give him a major say in the destination of the major Group One prizes.

A strong juvenile team is also set to include last week’s impressive Leopardstown winner September who is likely to take on Alpha Centauri in the six-furlong Albany Stakes.

O’Brien has saddled 55 Royal Ascot winners to date in his career, second only to Sir Michael Stoute among his current rivals. Last year he equalled the late Sir Henry Cecil’s meeting record when scoring seven times. He is 2-7 to win the leading trainer award for a third year in a row and an eighth time overall.

One juvenile unlikely to travel to Ascot is the Fozzy Stack-trained Commander Grigio, an impressive Curragh maiden winner whose next start is likely to be back at HQ over Irish Derby weekend.

“He’s just growing a bit at the moment and Ascot will come a bit soon for him. He’ll wait for the Railway Stakes,” reported Stack.