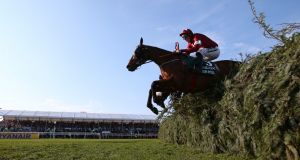 Following the shock news Michael O’Leary will be winding down the hugely successful Gigginstown House Stud operation over the next few years, we look at five of the best horses to have carried the famous maroon and white silks.

It is impossible not to put the remarkable nine-year-old at the top of any Gigginstown list. A four-time winner at the Cheltenham Festival, his place in the history books is secure following back-to-back Grand National victories at Aintree in April - the first to do so since the great Red Rum.

Sent off at 33-1 for the National in 2016, the then nine-year-old got the better of The Last Samuri under teenage jockey David Mullins, to spark jubilant scenes. What made it all the more extraordinary was that Rule The World was still qualified for novice chases and had previously not won over fences.

A huge talent both over hurdles and fences, War Of Attrition gave O’Leary a golden moment when winning the Cheltenham Gold Cup in 2006, beating Hedgehunter by two and a half lengths. He went on to land the Punchestown equivalent, and bagged four Grade Ones in total.

Ten years on from War Of Attrition, and Don Cossack provided O’Leary with another Gold Cup - running out a four-and-a-half-length scorer from Djakadam. Sadly an injury meant the six-time Grade One winner did not run again after his Cheltenham heroics.

As good as any horse associated with the O’Leary team, the mare started off with Willie Mullins, before joining Gordon Elliott. It is a measure of her class that of her 14 career wins, 10 have come at the top level - and she has led them home at the Cheltenham, Aintree and Punchestown festivals.