“Two mile is his optimum trip. His dam is a half-sister to Newmill and he pulls hard” 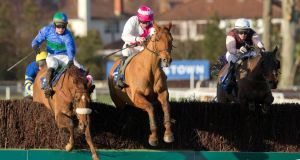 
Mount Colah has no Cheltenham ambitions but after mixing it with some potential festival stars throughout the season he proved his own credentials as a high class novice chaser with a victory at Leopardstown yesterday.

The 6/1 shot rallied so well up the straight for amateur jockey Noel McParlan he overhauled both Moscow Mannon and Mallowney to land the €20,000 novice chase. It was a second win in a row for the diminutive eight-year-old whose first two starts over fences saw him placed to the Willie Mullins stars, Ballycasey and Mozoltov.

“He didn’t jump like his normal fluent self but he’s got guts to burn and came back well. He’s got that bit of class as well,” said Mount Colah’s Banbridge, Co Down-based trainer, Jerry Cosgrave.

“Two mile is his optimum trip. His dam is a half-sister to Newmill and he pulls hard.”

Rare is the trainer wishing for hefty punishment from the handicapper but after Art Of Payroll easily won yesterday’s handicap hurdle Dessie Hughes wistfully wondered if a trip to Cheltenham might be out of reach. “He’s in the County Hurdle but I think he’s too far down the weights,” Hughes said of Art Of Payroll who is number 92 on the entry list on 10st 2lb. “Even with a mandatory penalty I don’t think he’ll make it but if by some miracle he does, he will go.”

He wouldn’t be a back-number judged by the ease with which he won yesterday and Hughes said ruefully: “If you’re up high the English handicapper gives you a few extra pounds but if you’re low he won’t give you anything and you can’t get in!”

Overly keen
Sailors Warn is number 39 among the County entries but Edward O’Grady didn’t appear overly keen to travel despite the horse beating the Grade One performer Thousand Stars in the Ballsbridge Hurdle since Sailors Warn is already rated 3lb higher in Britain.

“It’s marvellous to have him here though as he stood on piece of steel about 18 months ago and we couldn’t get him sound. He had a CAT-scan and we were told we only had a 10 per cent chance of getting him back. But 10 per cent is better than none so it’s lovely to see him back sound and well,” said O’Grady who also saddled a winner on Saturday at Navan in Kitten Rock. “We knew if Thousand stars showed up we had no chance, but if seven hundred stars did, we might have!”

Arthur Moore saddled the favourite, Home Farm, for the €50,000 Carrickmines Chase but it was his other hope Pass The Hat that scooped the prize under jockey Robbie Colgan.

“The ground is vital to him and Robbie gave him a great ride. It might be hard to get him into the Irish National but there’s a novice handicap at Punchestown afterwards that looks an obvious one,”