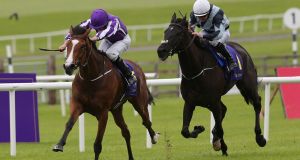 Minding has two recent victories over 10 furlongs including the Sea The Stars Pretty Polly Stakes (above). Photograph: Lorraine O’Sullivan/Inpho.

Just two fillies, Snow Fairy and The Fugue, have won the Qipco Irish Champion Stakes in two decades but bookmakers appear to believe the fairer sex will carry Aidan O’Brien’s principal hopes for some fresh Leopardstown history on Saturday week.

The champion trainer’s tally of seven wins in the €1.25 million ‘Irish Champions Weekend’ highlight is matched only by his former jockey Mick Kinane who rode the last of his seven on Sea The Stars in the final year of his illustrious career.

O’Brien has indicated he will be multi-handed and has kept open the option of running his superstar three-year-old, Minding, as well as another star filly, Found, who was runner-up to Golden Horn in the race a year ago.

Minding is a 7-4 ante-post favourite for the Coolmore Matron Stakes on the same card but is a general 7-2 second-favourite for the Champion which is run over the same 10-furlong trip that the O’Brien star has won her last two starts in the Pretty Polly and the Nassau.

With Dermot Weld outlining a possible alternative Arc warm-up for the dual-Derby hero Harzand in the Prix Niel if ground conditions are too fast at Leopardstown, the only firm running plans for the Champion Stakes currently appear to be in relation to the French Derby hero, Almanzor. It is a quarter of a century since the last French-trained winner of the race, Suave Dancer.

A total of seven fillies have landed the race, including three in a row between 1986 and 1988 for Park Express, Triptych and Indian Skimmer respectively. All seven of O’Brien’s previous winners have been male but his shortest-priced colt this time is US Army Ranger, a general 12-1 shot after failing to make the frame in the Royal Whip Stakes earlier this month.

Should Minding take the Champion Stakes route it could leave the Matron open for another Ballydoyle Group 1 winner, Alice Springs, while O’Brien has anticipated significant improvement for Found after her return to action.

As well as his seven wins, O’Brien has also had to settle for the runner-up spot on six occasions, including a memorable defeat for Galileo in 2001 to Fantastic Light.

That was the last of five Champions Stakes victories for Godolphin who could yet be represented this year by the Eclipse winner Hawkbill if ground conditions are suitable.

“He is in the Irish Champion and the Champion at Ascot. Wherever there is soft ground he will go,” said the Godolphin trainer, Charlie Appleby. “If conditions at Leopardstown are not right we will wait and go for Champions Day.”

However one horse already out of the equation is Time Test, who had been as low as 7-1 in some betting lists.

“Time Test is having a break. Roger (Charlton) wasn’t particularly happy with him in the lead-up to the Juddmonte so he won’t be going to Ireland,” said a spokesman. “We’ll see how he does. Only when he’s back in full work and pleasing Roger will a decision be made on his future.”

English trainer Brian Ellison is targeting Day Two of ‘Champions Weekend’ at the Curragh with Sunday’s impressive Beverley winner, Orewa who is set to line up in the €300,000 Tattersalls Ireland Super Auction Sale Stakes.

“He’s a bit of a lad so we had him gelded and had his wind done at the same time. He’d been working well so we expected him to go close at Beverley. He’ll head to Ireland for the big sales race,” said Ellison.

In other news the leading jump jockey Andrew Lynch faces up to two months on the sidelines after fracturing his arm in a fall at Cork on Sunday. “Andrew has a fractured right humerus. He’ll be out for two months at least,” said the Turf Club, medical officer, Dr Adrian McGoldrick.