On-course bookmakers working towards limited return to racecourses this summer 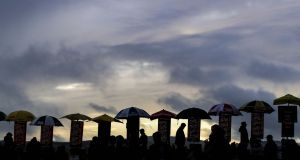 A view of bookmakers before racing starts at the Leopardstown Christmas Festival. Photograph: Bryan Keane/Inpho

Ireland’s on-course bookmakers believe the potential exists for them to return to work at racecourses and provide a restricted service at some point during the summer.

The expectation is that racing in this country will resume behind closed doors at some point in the coming weeks and the Irish National Bookmakers’ Association (INBA) is looking beyond that to how they might be able to return to work.

On-course bookmakers aren’t allowed operate in a behind closed doors environment and were absent during 10 fixtures run here under such restrictions prior to sport being shut down on March 24th.

The Government has banned all mass gatherings of more than 5,000 people until September due to the Covid-19 pandemic which has resulted in the cancellation of many top sporting events.

Although hopes are high of a resumption of racing here behind closed doors, Horse Racing Ireland (HRI) has identified on-course bookmaking as one of the sectors particularly vulnerable economically during the coronavirus emergency.

So on the eve of what would ordinarily be the start of the Punchestown festival the INBA has floated the idea that racing’s outdoor environment might at some point allow limited crowds to attend fixtures before September.

The body’s chairman said on Monday he is confident that racing behind closed doors will be successfully carried out once Government gives HRI the green light to do so.

Ray Mulvaney also said that when the behind closed doors regime has bedded down, and given any ease of Government social restrictions in the future, there could be an opportunity for limited attendances under the 5,000 limit to return to tracks.

“Is this an opportunity with the GAA closed, restaurants, pubs, cinemas, theatres, that you could go back racing say in three weeks or six weeks: let people back in if they went through the advice and they bought two or three thousand tickets online, I don’t know.

“But if it was the case I’m sure bookmakers would be Covid-19 ready, with debit cards and gloves and other precautions. We’re an outdoor area with no bars, no restaurants: perhaps it is something where they could look at letting people in,” Mulvaney said.

He added that bookmakers want to be “part of the solution rather than the problem” and stressed that any moves on the matter, which he has spoken to HRI about, should be made “slowly”.

However the bookmaker spokesman also said that with so many other sports and leisure industries facing a long-term shutdown, there is popular demand for entertainment avenues.

“I live in Dún Laoghaire and there were a lot of people on the pier on Saturday and Sunday and no one had anything to do.

“Not for now but maybe in future, if the Government aligned, and they had all the measures in place, is it possible to let two or three thousand people into Leopardstown, Naas or the Curragh?” he asked.

“You must remember horse racing is an outdoor experience. You don’t necessarily need a bar to be open, or a restaurant, in those big facilities at the Curragh or Naas.

“First of all you get racing going again behind closed doors successfully and in three, four or five weeks there could be more evidence and information on the pandemic,” Mulvaney added.

He said attendance numbers could be limited through tickets being sold only online and that limits could also be placed on the numbers of bookmakers present.

“We would go back with less bookmakers, relative to the crowd or whatever was safe to do it in a safe manner.

“If it was me in charge you’d start with two, maybe three thousand, and see how you went. If everything is in order, we’re an outdoor industry and maybe there’s a time were you could turn a negative into a positive and maybe get a new audience going,” he said.

“In six or eight weeks we’re in the height of the summer and maybe people might just want to go up to Leopardstown once all the controls are in place and everyone is safe,” Mulvaney added.

After a board meeting on Monday HRI remains ‘racing ready’ if the Government announces any relaxation of restrictions this week ahead of the May 5th deadline on social guidelines.

Racing is expected to resume behind closed doors in Germany next week while French racing has received ministerial support for a resumption on May 11th.

Three fixtures are expected to be run in France on that day including at the country’s premier track at Paris-Longchamp.