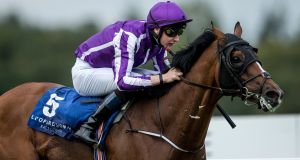 The gambled-on Triumph Hurdle favourite Ivanovich Gorbatov could have to overcome ‘Girl Power’ if he is to successfully advertise his Cheltenham festival claims at Leopardstown on Saturday.

The ex-Ballydoyle horse, who is having his new career over jumps masterminded by Joseph O’Brien, is a heavy odds-on shot for the €85,000 Spring Juvenile Hurdle, the first of four Grade 1 races on the card.

But as well as possibly having to again face Let’s Dance, odds-on herself when beaten by Ivanovich Gorbatov on their jumping debuts at Christmas, the JP McManus-owned horse is also set to clash with another Willie Mullins filly in Apple’s Jade, winner of the St Stephen’s Day Grade 2 at Leopardstown, as well as Jer’s Girl, beaten a head in that race.

The trio are rated the dangers to Ivanovich Gorbatov by bookmakers, ahead of a contest which threw up the subsequent Triumph Hurdle hero Our Conor in 2013.

“He was very good on his first run, very professional, and hopefully he should have improved for that. He seemed to cope with the ground OK too, but should go on better ground as well,” Geraghty said.

In other news, the former star cross-country horse, Risk Of Thunder, who raced in the colours of Sean Connery for some of his career, has died at the age of 27.

Retired in 2002, the Enda Bolger-trained runner won the La Touche Cup over the banks at Punchestown’s festival on seven occasions and has been credited with re-energising interest in the cross-country discipline.

Serena Williams through after a slow start in Paris 16:57
Exeter coach Baxter calls for an end to mass Covid-19 testing in rugby 16:01
Colin Keane has Shane Foley in his sights as they head for Cork 15:52
Dermot Weld’s Tarnawa won’t be aimed at the Arc 15:47
All Blacks facing a Christmas in quarantine 15:33
Here is your handy guide to sport on television this week