Galway Races: Punters look to the heavens for inspiration 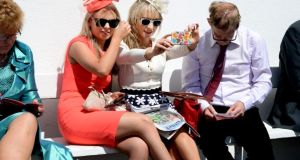 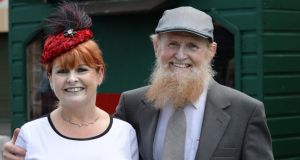 A small aircraft plugging a website promising to uncover the “secrets of the Gee Gees” flew in the clear blue sky over Ballybrit for much of yesterday. The loud swears from a crowd who had backed all the fancied horses in the Galway Plate – only to see a long shot ridden by a 19-year-old novice romp home – suggested the site would be busier than normal overnight.

At the height of the boom, the Wednesday of the Galway Races was awash with the political class but since the infamous tent folded they’ve been thin on the ground and were it not for the presence of President Michael D Higgins, there would have been no politicians of note in Galway.

Did he ever think, when he was a political firebrand, that he would one day present the Galway Plate as President? “In truth, it never crossed my mind,” he laughed. “The crowd was different back then,” he said. “You’d always have people coming home from England, they made the races their holiday. Then we had the helicopter period and I think we are in the post-helicopter period now,” he said before his attention turned to the big race and Shanahan’s Turn star turn.

The horse led from the start. Trained by Henry de Bromhead and ably steered by Johnny Burke, he was a 16/1 shot as the race started but went clear after the third last and finished 5½ lengths ahead of the chasing Paparrazi Kid.

Ivan Yates was standing in the sun with his son. “I’m backing Jackson Lady in the Plate,” he said. The horse fell at the second, proving bookies – or ex-bookies – sometimes get it wrong.

Noel Henley was in the parade ring as the the big race got under way. “My father owned Arkle’s father,” he said. As conversation starters go, it was pretty hard to beat. Arkle’s sire, Archive, was bought by his dad for £300 off the Vard furriers in Dublin.

“They wanted £3,000,” Henley said. “Now that might as well have been a million pounds for my father but he drove a hard bargain and talked the price down to £300.”

Henley is a trainer himself. “We train a few slow ones down in Tallow,” he said with a wry smile. He’s wasn’t in Galway to make money. “I have been coming here for 60 years. I don’t smoke. I don’t drink and I couldn’t care less about gambling.”