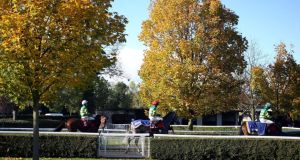 The parade ring at Kempton before the Weatherbys Bank Novices’ Hurdle yesterday.

Flemenstar is set to have his first start for new trainer Tony Martin in Sunday’s Boylesports Fortria Chase at Navan where he will defend the Grade Two prize he won so impressively last year.

It is less than two months since owner Stephen Curran’s controversial decision to switch the horse to Martin from Peter Casey who had trained the horse to register Grade One glory both as a novice and in last season’s John Durkan at Punchestown.

Flemenstar was subsequently beaten in both the Lexus and the Hennessy at Leopardstown and hasn’t been seen since running disappointingly at Aintree in April but Martin has been impressed with what he has seen so far.

“He has done plenty in the last six weeks and everything he has shown us has impressed us, both schooling and galloping,” the Co Meath-based trainer reported. “Hopefully he’ll be able to run on Sunday. He’s won on all types of ground. But the most important thing will be that he comes back safe the next day.”

Flemenstar’s likely opposition will become clearer after today’s five-day forfeit stage but already Baily Green has been ruled out. Runner-up to Sizing Europe at Gowran a month ago, Baily Green won’t be seen next until Christmas.

“He won’t go until Christmas now. He got a bang on his foot after Gowran. He’s in good form but won’t be ready to run this weekend. It will probably be Leopardstown at Christmas,” trainer Mouse Morris said yesterday.

Rubi Light, third in that Gowran race, is one horse that remains in contention to run in the Fortria.

On agenda
Whether or not another attempt at the John Durkan in December will be on Flemenstar’s agenda after this weekend is unclear. “It’s one day at a time. We’ll get the first one over with and then make plans,” Martin added.

Sizing Europe could be a horse that Flemenstar runs into at some stage this winter as his trainer Henry De Bromhead appears to have ruled out any more attempts at three miles after the former two-mile champion finished runner-up for the third time in the JNwine.com Champion Chase over the weekend.

The Christmas Grade One at Leopardstown may be next for Sizing Europe after De Bromhead reported: “I doubt he’ll try three miles again. We’ll look at the Paddy Power at Leopardstown and I’d say, all being well, he’ll go for the Ryanair rather than the Champion Chase this year.”

There will be Grade Three action at Naas on Saturday and champion jumps trainer Willie Mullins could make a post-Melbourne Cup impact in the Fishery Lane Hurdle for which he has three options after yesterday’s forfeit stage.

The trio includes Diakali, winner of the French equivalent of the Triumph Hurdle, the Prix Alain Du Breil, at Auteuil last June, and also Blood Cotil who beat Diakali when landing a Grade Three at the Paris track in May.

Also left in among the 10 acceptors are Gordon Elliott’s Flaxen Flare and the Dermot Weld-trained Diplomat.

The Mullins-trained Turnandgo, impressive winner of a pair of bumper races last season, including when beating Captain Cutter at the Punchestown festival, holds a couple of entries in maiden hurdles on Saturday.

First Lieutenant
In other news the Betfair Chase at Haydock later this month is a likely port-of-call next for First Lieutenant who disappointed trainer Mouse Morris with his fourth placing behind Roi Du Mee in last Saturday’s Grade One at Down Royal.

“He was disappointing on the day but we can’t find anything wrong with him. We’re going to have to put it down as one of those days, a complete write-off. He was over 20 lengths further behind Roi Du Mee than he was at Punchestown so he’s gone backyards and he should have improved,” Morris said yesterday. “It never happened on the day for whatever reason but we haven’t given up the ghost just yet I think we’ll probably go to Haydock (November 23rd),” he added.

Defy Logic is likely to have his second start over fences at Grade Two level in Punchestown on Sunday week. Trainer Paul Nolan is targeting the Craddockstown Chase for the JP McManus-owned star who earned Arkle Trophy quotes at Cheltenham in March after his recent impressive Naas debut.