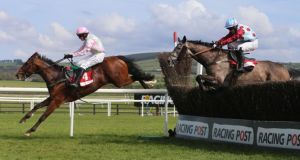 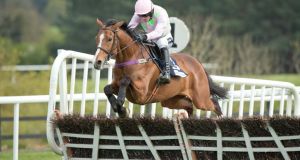 Ruby Walsh and Faugheen on the way to winning the Punchestown Champion Hurdle. Photo: Morgan Treacy/Inpho

Faugheen lived up to the hype with a flawless display in the Punchestown Champion Hurdle.

The seven-year-old took his record to a perfect 10 out of 10, to give Willie Mullins yet another Grade One winner.

Ruby Walsh was allowed to dictate matters at his own pace and did not appear to be going much of a gallop until quickening the tempo four from home.

Arctic Fire and Paul Townend loomed up coming out of the back straight, but as soon as Walsh gave Faugheen (1-6 favourite) a squeeze the response was immediate and the race was over.

“That was a good performance. Ruby didn’t hang around and kept applying the pressure from the front. It was a gutsy ride,” said Mullins.

“On the book he had one horse to beat and that was Arctic Fire. He wasn’t on the bridle at any stage, though, and when he’s not on the bridle you know he’s going some pace.

“Arctic Fire is a fair opponent and Ruby wasn’t going to let him into it and use his speed. He was just afraid of Arctic Fire’s speed and piled it on from the front to dampen his fire.

“From a mile out he started to apply it and I was wondering if he’d crack from so far out, but he knew what he had underneath him.

“His jumping is better going faster. Ruby kept asking the questions and at every hurdle he picked up.

“He’s done it now in year one and we’ll let him tell us how good he can be. Our Conor looked invincible when he won the Triumph, but fate can go against you.

“I believe in him, but he has to stand the test of time. He’s very, very good. We’ll see now if the handicapper puts him past Hurricane Fly.”

Walsh added: “As Paul Townend pulled up there, he was making the sound of a jet and that is what Faugheen is. He is incredible.”

Nichols Canyon made it a Grade One double on the day for Mullins and Walsh, justifying 4-5 favouritism in the Champion Novice Hurdle.

Just like Faugheen, he made all the running and the result was never in any doubt as he landed his fourth Grade One of the season for owner Graham Wylie.

Mullins said: “He was bought as a Flat/hurdle horse and wouldn’t have the frame of a chaser. He’ll never jump a fence. The size of him I wouldn’t fancy sitting on him running down to a fence!”

When asked about tackling Faugheen, Mullins said: “He only has 20lb to improve, but he is a novice.”

And on the possibility of a World Hurdle bid, the champion trainer said: “He’s very free and I couldn’t see him winning a stayers’ doing what he did there. At the moment we’ll go down the two-mile route.”

Blood Cotil put a dismal showing at Cheltenham behind him with a stylish success in the Novice Handicap Chase to give Mullins another winner, this time with Townend on board.

Sent off joint-favourite for the Grand Annual in March, he found the soft ground all against him and was pulled up.

To Irish Cavalier’s credit he plugged on gamely to say he had already run at the Festival this week but he could not quite get back on terms.

“He looked to be going so well for so far. I thought this fella had been a bit disappointing as that’s only his second win over fences,” said Mullins.

“I’d imagine we’ll keep him going for the summer with a view to Galway. He looks tailor made for the Plate after that performance.

Paul Carberry was stood down for the rest of the day following his fall from Silver Tassie, with what was reported to be a sprained muscle in his neck.

As long-time leader Blue Atlantic came back to the field, Tandem travelled very strongly on the run to the final flight but was soon joined by Walsh on the 9-2 winner.

The pair jumped the last well, but the JP McManus-owned Snake Eyes proved the stronger on the run to the line, winning by a ready two and three-quarter lengths.

In a rare reverse for the Mullins team, market leader Max Dynamite was beaten before the turn for home.

Henderson said: “I was pleased with that. He’s been a bit unlucky. I took him to Aintree but he had a problem with his back and I couldn’t get a saddle on him.

“He also got balloted out at Cheltenham. It’s probably not the hottest race of the week, but it’s lovely to win a race with him here. He could possibly go chasing next year.”

Luke Dempsey once again advertised his ability when winning on Mallards In Flight in the Mares Handicap Chase.

Despite being out of the handicap, the nine-year-old has been in great heart of late and allowed Dempsey to follow up his Cheltenham win on Killutagh Vic.

Gavin Cromwell’s pride and joy pinged the last and the 8-1 chance held off the late rally of Speckled Wood, with Burn And Turn one-paced back in third.