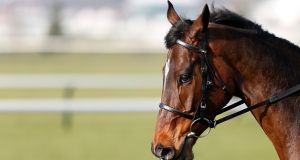 Douvan is favourite for the Ryanair Novice Chase at Punchestown on Thursday. Photograph: Getty

After an opening day when several of his stable stars ran flat, Willie Mullins is hoping the same fate does not await Douvan in Thursday’s Ryanair Novice Chase at Punchestown.

Of all his superstars, Douvan, unbeaten over hurdles and fences since joining Mullins from France, is the shortest price of them all.

He has looked simply imperious over the bigger obstacles, with his only real mistake coming at the final fence on his chasing debut.

Douvan had Sizing John seven lengths back in second in the Arkle at Cheltenham and he was even more impressive at Aintree, beating The Game Changer by 14 lengths, and those two take him on again.

“Douvan has been doing everything well since Aintree and I’m happy with him. He’ll come here and take his chance,” said Mullins.

“Coming here this week, we were thinking it could be hard after running at Cheltenham and Liverpool. We could have a few more hiccups before the end of the week.

“I’m happy with them all, but it’s just the year that it is that we are doing a few different things (chasing British title), and there is every chance that a few more could run flat like some have. But we have to put up with that.”

Gordon Elliott’s The Game Changer has also been to both Cheltenham and Aintree, but he has the advantage of having had a mid-season break.

The seven-year-old enjoyed a fruitful summer and autumn, winning three Grade Threes before being roughed off in October to be brought back for Cheltenham.

Elliott, who suffered a huge blow with the news of Don Cossack’s injury at the weekend, feels his charge could give the favourite something to think about.

“The Game Changer will love the drying-out ground and I don’t think he’ll be far away from Douvan in the novice chase on Thursday,” he told his Boylesports blog.

Jessica Harrington’s Ttebbob looked like being a major player in the division earlier in the season, but the wheels fell off when Douvan put him in his place at Christmas.

He does at least have the advantage of being fresh.

Harrington told At The Races: “He looked like being very good early on and I’m not sure what happened at Leopardstown at Christmas.

“He’ll be fresher than some, but he’s coming up against Douvan.”

Henry de Bromhead’s Sizing John takes on Douvan for a sixth time and he will be partnered by Barry Geraghty this time in place of the injured Johnny Burke.

The sole British raider is Neil Mulholland’s Baltimore Rock, who was a faller in the Arkle, while Vincent Halley’s Mr Picotee completes the field.