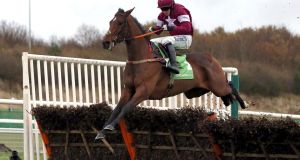 It is just 9-2 about Willie Mullins repeating last year’s Stan James Champion Hurdle 1-2-3 but Henry De Bromhead is hopeful the progressive Identity Thief has enough improvement within him to upset the Mullins applecart.

The outstanding title-holder Faugheen is a heavy odds-on favourite to repeat his 2015 victory at Cheltenham and his stable companions Nichols Canyon and Arctic Fire give Mullins a stranglehold at the top of the Champion Hurdle betting.

Faugheen’s official 176 handicap rating is equal to the legendary Istabraq at his peak, giving him plenty to spare over both Arctic Fire (164) and Nichols Canyon (160) who chased Faugheen home in last month’s Irish Champion Hurdle.

If any horse is going to upset the Mullins trio, bookmakers reckon it will be Identity Thief who is a 14-1 shot in ante-post lists and continues to impress his trainer.

“I’m delighted we backed off him a little after Christmas and he’s in great form at the moment. He has improved a huge amount already but I’m hoping on better ground than we got at Leopardstown the last day there might be slightly more in him . . .,” said De Bromhead.

“The ground he won on at Down Royal was similar to what they usually get on the first day at Cheltenham these days so that would be fine,” he added.

Special Tiara is in line for the Champion Chase again but a decision on whether Sizing John lines up for the Arkle may be left until much nearer the time.

Sizing John has come off worst the four times he has faced Douvan, including in the Christmas Grade One at Leopardstown and his 10-1 odds for the longer JLT are half his Arkle ante-post price.

“I would imagine we’ll declare him for both at the five-day stages and analyse the outlook for each race. He is in the JLT as well but we don’t know about the two and a half miles. He’s never run beyond two. But if he stays I imagine he could go well in a race like the JLT,” said De Bromhead who’s festival raiding party could ultimately number close to ten.

Smashing earned Ryanair Chase consideration after his Red Mills Trial victory at Gowran on Saturday while the Galway Plate hero Shanahan’s Turn could line up in the Ultima Business Solutions Handicap Chase on Day One. Buckers Bridge is another handicap option as is Domesday Book.

Aupcharlie is a Cheltenham veteran, having run on three occasions at the festival including when third to Cheltenian in the 2011 Champion Bumper. He ran behind Benefficient in 2014 and was unplaced behind Darna in a Grade Three handicap chase last year.

However he could now be something of a ‘dark horse’ for the Foxhunters after getting the better of Marito, a 7-1 second-favourite for the amateur race on Gold Cup day, in a point to point at Oldtown over a week ago.

“I don’t know if he’ll stay three miles and two but he beat Marito in a point to point (by half a length at level weights) and that horse is second favourite I think. What I do know is he’ll improve for better ground and I would imagine Jamie Codd will ride again,” De Bromhead said.