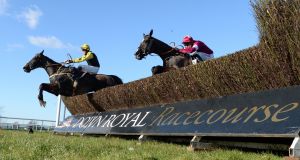 Irish racing’s big guns have bypassed the latest National prize up for grabs and Crosshue Boy is the sole raider from this country due to line up at Ayr.

So with Gordon Elliott, Willie Mullins and Michael O’Leary’s Gigginstown Stud team waiting for Easter’s Boylesports Irish Grand National it is left to Doyle to fly the flag in Scotland.

Ayr’s authorities reckon the last horse trained in Ireland to win Scotland’s biggest National Hunt prize was the Larry Hyland trained and ridden Huntsman back in 1869.

On that occasion the nine-year-old proved a length too good for Dingo Dollar who on Tuesday was backed into 8-1 favouritism with the sponsor for the marathon event.

Not surprisingly Crosshue Boy, who ran twice over hurdles at his local Wexford track last month, has also attracted ante-post support and is as low as 10-1 in some lists.

Based near Enniscorthy, Doyle has booked his fellow Wexford man Seán Flanagan, to ride on Saturday.

“He hasn’t run on good ground since this time last year so we hope that’ll bring the best out of him,” Doyle said on Tuesday.

“The plan this season was the National [Aintree] but we ran him in December over the National fences [Becher Chase] and he didn’t take to it so we rerouted him to this race straight away.

Along with his brother Donnchadh, Doyle oversees the Monbeg Stables operation that has sold on some high class point-to-point talent in recent years including both Holywell and The Last Samurai.

The young Crosshue Boy looked set to be sold on as well until injury intervened.

“He won his four-year-old maiden and then picked up this leg problem. He had to have a year off and he wasn’t saleable so lucky enough Niall Heffernan [his owner] was interested in going racing and left him with us,” Doyle said.

Three wins over fences in the space of 10 days in March of last year preceded Crosshue Boy’s lucrative success at Ayr.

“It wasn’t a surprise. He had a couple of right good runs coming up to it. But I knew the faster the ground the better he’d be,” his trainer added.

Dingo Dollar, trained by Alan King, has been backed into favouritism with a Coral spokesman reporting: “He’s run well all season without winning, been placed in both the Ladbrokes Trophy and the Grimthorpe Trophy, and punters are backing him to finally get his head in front.”

The Scottish-trained Big River is also among the market leaders as is Vintage Clouds who fell at the first fence in Saturday’s Aintree National.