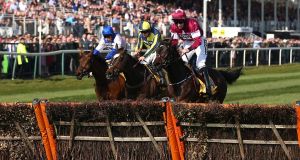 If The Cap Fits ridden by jockey Sean Bowen (centre) on the way to winning the Ryanair Stayers’ Hurdle at Aintree from Roksana (left) and Apple’s Jade (right). Photograph: Nigel French/PA Wire

If The Cap Fits emerged victorious after a pulsating climax to the Ryanair Stayers’ Hurdle at Aintree.

A field of 15 runners went to post for the three-mile Grade One and the focus of attention pre-race was Gordon Elliott’s prolific mare Apple’s Jade, who was bidding to bounce back from a disappointing run when favourite for the Champion Hurdle at Cheltenham last month.

She was a warm order to rediscover the winning trail as the 5-6 market leader and for much of the way she appeared in complete control, as she adopted her customary pacesetting role in the hands of Jack Kennedy.

However, it was clear early in the home straight she had a real race on her hands, with both Harry Fry’s If The Cap Fits and Dan Skelton’s Mares’ Hurdle winner Roksana moving into contention.

There was little to choose between the trio jumping the final flight and all three horses gave their all up the run-in.

In the final strides Apple’s Jade wilted slightly and If The Cap Fits and Roksana flashed by the post almost as one, but the judge confirmed the former had won by a head – providing jockey Sean Bowen with his first top-level success.

Apple’s Jade was only a neck further away in third.

If The Cap Fits did not initially return to the winner’s enclosure, but was reported to be none the worse by his trainer.

Fry said: “The horse is fine. He was taken to the wash-down area first as a precaution – they didn’t want to take any chances.

“When he made a bad mistake at the last I thought that was us cooked. He had every excuse to give up – he didn’t have much room, the gap was tiny, but he wanted it so badly. He’s run his heart out.

“With Paul and Clare [Rooney, owners] here today it’s a fantastic occasion. He’s been really consistent all season and we’ve always thought he was a high calibre horse and now he’s a Grade One winner.

“It’s a great team effort, these Grade Ones are pretty rare.”

Bowen was taking over in the saddle from the recently-retired Noel Fehily.

Fry added: “Obviously with Noel retiring, he thought an awful lot of the horse and played a big part in getting the horse to this point. Sean benefited today and that’s his first Grade One, so it’s great.

“That’s our first winner at the Aintree Festival, we’ve been trying long enough.

“I don’t know what we’ll do next year, we’ll just enjoy today first.”

Elliott said of Apple’s Jade: “Jack said she was not the mare she was during the early part of the season. She has won 10 Grade Ones now. She is home in one piece and that is all we care about.

“We will have her back for next year. We will see how she is and if she is okay we will go to Punchestown.

“She has been beaten a neck in a Grade One, so we shouldn’t be disappointed – she is not a machine.

“It was a Grade One and there was no hiding place, so I’m not going to make an excuse. I wouldn’t say she didn’t stay the trip.”

Ornua got his season back on track with a dominant front-running display in the Doom Bar Maghull Novices’ Chase.

He was in front when falling at the sixth fence in the Arkle Trophy at Cheltenham last month and was the 3-1 joint-favourite to bounce back along with Arkle runner-up and fellow Irish challenger Us And Them.

Riding Ornua for the first time over fences, Davy Russell sent his mount straight to the lead and some slick jumping kept the pressure on his rivals in behind.

Us And Them tracked him into the straight and was gradually closing the gap after the final fence, but Ornua had enough in reserve to prevail by a length and three-quarters.

De Bromhead said: “It was brilliant for the horse and Davy game him a brilliant ride. He got him jumping great.

“I’m delighted to get it for John Phelan [part-owner], who is a great supporter of ours and it was lovely to get a Grade One winner here.

“He is a very good horse and he has done really well over fences. You saw his run at Sandown and even at Roscommon he beat Cadmium, so the form is strong.

“He is a real good horse and was probably just unlucky in the Arkle. It looks like it could be his track now. You won’t be able to keep us away!

“We will have a look at Punchestown and the two-mile novice chase there. He deserves a crack at it and hasn’t been busy.”

Phelan added: “I won the Scoop6 so I thought ‘easy come easy go’.

“I won about £130,000. I bought Ornua on a low budget and Henry picked him out and he has done fantastic.

“You don’t expect on a low budget to have a Grade One winner. I’m speechless really.”

Reserve Tank dug deep to cause an upset in the Betway Mersey Novices’ Hurdle at Aintree.

After only hinting at promise on his first two starts over hurdles, the Colin Tizzard-trained five-year-old has really turned a corner since the turn of the year – registering successive wins at Sandown and Kempton.

However, he faced a significant step up in class for this two-and-a-half-mile Grade One affair and was priced up as a 20-1 shot under Robbie Power.

Reserve Tank travelled strongly on the heels of the leaders for much of the race and jumped to the front three flights from home.

Brewin’upastorm – fourth in the Ballymore Novices’ Hurdle at Cheltenham last month – did his best to close the gap, but Tizzard’s charge found extra from the last hurdle to prevail by three and a quarter lengths.

Tizzard said: “He’s barely blowing – that’s when you know they are a real good horse.

“He had ulcers at Christmas, looked terrible in his coat and was going nowhere, but in his last three runs he’s improved with leaps and bounds each race.

“Robbie gave him a cracking ride, gave him a breather on the bend and everything. He’s a strong stayer.

“I should think he’ll go chasing next year and I’ll have a job to keep the owners away from Punchestown. A few of them own Lostintranslation and they are going anyway.

“I’ll have a look at the races at Punchestown, but that trip looks fine. He stays well, but had no trouble laying up.”

Brothers Dan and Harry Skelton combined to land the opening race on Grand National day as Aux Ptits Soins ran out a decisive winner of the Gaskells Handicap Hurdle at Aintree.

He joined the Skelton team for this season – having been off the track for more than 18 months – and secured an impressive handicap victory at Cheltenham on New Year’s Day, before finishing down the field behind star stayer Paisley Park in the Cleeve Hurdle.

Reverting to handicap company on Merseyside, the 11-1 shot travelled strongly into the home straight and powered clear from the final flight to score by four and a half lengths under his jubilant rider.

Aux Ptits Soins was chased home by stablemate Tommy Rapper to give the yard a one-two.