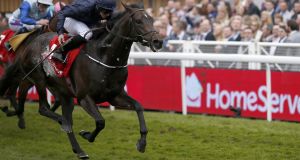 Epsom’s Investec Derby has defined racing for more than two centuries and Aidan O’Brien will have history in his sights when the gates open for the world’s most famous flat race at 4.30 on Saturday afternoon.

It’s 16 years since Ireland’s all-conquering champion trainer watched Galileo streak past the Derby winning post which Italian breeder Federico Tesio once famously identified as the piece of wood that defines the thoroughbred.

A year later O’Brien won again with High Chaparral. An unprecedented hat-trick came between 2012 and 2014 and this time he has half a dozen chances to emulate the six Derby victories accumulated by his legendary Ballydoyle predecessor Vincent O’Brien.

If ‘MV’s overall influence on racing still makes him an unparalleled figure it is ‘AP’ O’Brien who continues to redefine the record books and, at 47, the potential for him to ultimately make them his own private property is undeniable.

That five of O’Brien’s contenders on Saturday are by Galileo is just one reminder of the Derby’s own constantly renewable history.

Ballydoyle’s standard-bearer Cliffs Of Moher is one son of the world’s most prepotent stallion. Galileo himself is a son of Sadler’s Wells, a horse trained by Vincent O’Brien but whose racing career paled next to his contemporary El Gran Senor, famously beaten in the 1984 Derby by Secreto.

The conflux of emotions that surrounded that Derby were unparalleled due to Secreto being trained by ‘MV’’s own son, David O’Brien. Yet 33 years later the potential is there for another familial Epsom twist.

Joseph O’Brien rode both Camelot and Australia to Derby glory for his father before losing his battle with the scales at just 22.

Now two years later he has a first Derby runner as a trainer with a son of High Chaparral in Rekindling. If he wins O’Brien Jnr will become just the fifth man – and the first since Harry Wragg in 1961 – to both ride and train a ‘Blue-Riband’ winner.

Then there is his younger sister Ana who will become just the third woman ever to ride in the race when she rides The Anvil for her father.

Wins for either are a tantalising prospect and hardly impossible considering this isn’t a Derby being defined as a coronation for a great talent a la Sea The Stars or Shergar. Instead it is wide open.

It’s not surprising then that a 19-strong field is the largest since 2003 and if the ridiculous furore over riding arrangements for the no-hoper filly Diore Lia is a very modern phenomenon, the prospect of an old-school Derby field hurtling around Tattenham Corner is enthralling.

That’s because the unique Epsom challenge remains unchanged since Orby became the first horse trained in Ireland to win the Derby 110 years ago. Should an O’Brien runner manage the same now he will have the glory of being the 20th Irish-trained victor.

Diore Lia apart this is so open a Derby that victory for almost any one of the other 18 could get viewed as logical through hindsight. Invariably all six Ballydoyle hopes are bred for the job and can boast trial form. In April Rekindling himself won the trial landed in 2016 by Harzand.

Rekindling subsequently finished unplaced in the Dante which was won by Permian, a horse beaten in a handicap at lowly Bath in April. Another of the Godolphin team, Dubai Thunder, has come to the Derby on a similarly unlikely route having won his only race to date just a fortnight ago.

Two grandsons of Galileo, Eminent and Cracksman, will bring a ‘Frankel Factor’ and Frankie Dettori’s presence on the apparent No.1 hope of John Gosden’s team will bring plenty support from a general public tuning in.

But this looks a Derby very much up for grabs where an intangible factor such as inspired ride could prove pivotal.

Ryan Moore is the polar opposite of Dettori in many ways but his presence on Cliffs Of Moher looks a significant expression of faith in the Dee Stakes-winning colt. Cliffs Of Moher isn’t assured to stay but that’s often the best profile going into the Derby.

Given a little cut in the ground there’s a sound case to be made for the first-time hooded Benbatl building sufficiently on his Group One pedigree to represent alternative each-way value.

However the best indicator to Cliffs Of Moher’s chance could actually be the horse not lining up.

The outstanding Guineas winner Churchill is being kept to a mile. Could that be because Cliffs Of Moher is good enough to do the Derby job instead? History tells us if anyone can be relied upon to know it’s O’Brien.