Cheltenham shows horses could fall at Brexit’s many hurdles

Equine movement between UK, Ireland and France would be nobbled by regulations 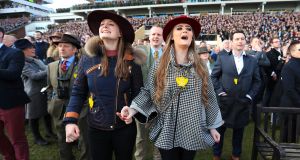 Racegoers watch the JLT Novices’ Chase at the 2018 Cheltenham Festival: There are 25,000 annual horse movements between the UK, France and Ireland. Photograph: Mike Egerton/PA

Henry de Bromhead would be more than familiar with European Union red tape.

The trainer, who won Thursday’s feature Ryanair Chase at the Cheltenham Festival with Balko Des Flos, brings a goat named Harvey along each year as a soothing companion for the highly-strung Monalee, a runner-up at the meeting for the second time in a row on Wednesday.

“Harvey is actually far more popular than the horses up in the stables here, he’s treated like a film star,” De Bromhead said.

The 45-year-old trainer’s runners can travel quickly across the Irish Border, provided they have their passport, under a tripartite agreement allowing free movement of horses between Britain, Ireland and France since the 1960s which is covered under EU law. There are 25,000 annual horse movements between the three countries.

Harvey is subject to a visit from the Department of Agriculture to check on his health before he can leave Ireland, part of what would be a “Doomsday scenario” according to Horse Racing Ireland’s chief executive Brian Kavanagh should similar veterinary rules then apply to horses following Britain’s potential departure from the customs union and single market.

No sporting event advertises the significance of Brexit more than Cheltenham, and the final date of March 29 th, 2019, will be just a fortnight after the festival.

Part of its charm is that backing a winner supersedes partisan values, with the French-bred Buveur d’Air cheered across the board in Tuesday’s Champion Hurdle for Old Etonian trainer Nicky Henderson and Meath-born jockey Barry Geraghty. No wonder the three racing jurisdictions are working so hard to present an united front.

On Friday at Cheltenham, the racing heads will speak again informally with a deputation including Minister for Agriculture Michael Creed, in order to brief all parties on the challenges.

“Ease of movement is the first factor, even just from a welfare position, and secondly that any arrangements post-Brexit would not involve tariffs,” Kavanagh said. “Britain and Ireland also operate a single stud book and have always been regarded as a single unit from a disease point of view. We’d be greatly concerned that would continue.

“From a British perspective, look at the fields this week and the number of Irish or French-bred horses we see. With the British model built on funding races from the betting industry, field sizes would be an issue.”

In a 2016 analysis of public racehorse auctions by Deloitte, €338 million was generated in sales by Irish vendors, €196 million of which was from non-Irish buyers.

“We need imports of 3,000 or 4,000 per year to keep our racing on the road and if there are any barriers, physical, bureaucratic or otherwise to that, it could have an impact on our sport,” said Rust. “Fundamentally we think government understands that.

“We’re hopeful we can persuade the right outcome on the legislation, but who knows, the higher politics may kick in at some point, and we’re a hostage to fortune on that.”

Julian Richmond-Watson, chairman of the British racing industry’s Brexit steering group, said this week about half of Irish produce is brought to Britain.

While there seems some optimism from up high, with Richmond-Watson reporting on the BBC Today programme that “even if it involves an electronic passport or something, we have to have a solution”, there remains the acceptance that racing is just another in the long queue of interests waiting to be served.

François Doumen, the Anglophile Frenchman who paved the way for his country when winning the 2004 Gold Cup with The Fellow, is back every year as a spectator and seems confident he will continue to do so.

“The will of racing at Cheltenham is so enormous I think nothing can beat it, even Brexit,” he said. “When there’s an enormous vice of having racehorses, it makes no difference to anybody. I can’t see why they should make it more difficult.

“I’m feeling very positive about the whole thing; we need to keep on doing business, we have to sell our good French horses to the Brits.”