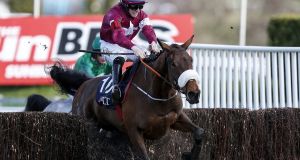 In years to come Missed Approach could become a pub quiz standard as the name of the horse that prevented an unprecedented Irish clean sweep of a Cheltenham festival card.

The six even backed onto to the final three winners on Wednesday. And as Mall Dini and Squouateur loomed up on Missed Approach in the closing stages of the Kim Muir Chase it did seem a remarkable ten-in-a-row, and a 16th Irish winner in three days, was on the cards.

But if home pride was bedraggled there was nothing defeated about Missed Approach’s resolution and he proved an ultimate Cheltenham spoilsport.

He isn’t alone with such a label. In 2011 it was Cheltenian who denied an Irish clean sweep in the final race of the second day. Those were days though when that year’s final festival haul of 13 winners seemed incredible. These are very different days again.

Rampant Irish expectations are such that few will bet on last year’s record haul of 19 being broken on Friday’s Gold Cup card. Even then however there may be nagging regret at coming so close only to run into Missed Approach. He hardly deserves villain status but will probably get it anyway.

Only for him it could have been Irish racing’s ideal seven from seven, a perfect symmetrical expression of Irish jump racing’s unprecedented superiority right now. And that it featured most of the game’s big hitters was only appropriate.

Willie Mullins secured his own piece of Cheltenham history with a double through Penhill and Laurina that makes him the festival’s most successful trainer.

Both Penhill and Laurina have English owners and Mullins subsequently pointed to superior prizemoney levels in Ireland as a reason for the gaping gap in results and resources compared to his cross-channel rivals.

But Thursday’s streak was substantially built on the home-grown power of Michael O’Leary’s Gigginstown Stud.

The billionaire businessman had the first three winners and finally broke his duck in the Ryanair Chase he sponsors as Balko Des Flos upset the odds on favourite Un Des Sceaux. Earlier Delta Work was successful in the Pertemps and the mare Shattered Love won the JLT.

Both of those were trained by Gordon Elliott who later completed his own 209-1 treble when The Storyteller landed the Brown Plate under a superb Davy Russell ride.

After his earlier wins on the Henry De Bromhead-trained Balko Des Flos and Delta Work, Russell tops the leading rider table with four winners for the week, one ahead of Shattered Love’s jockey, Jack Kennedy.

Both men ride extensively for Elliott, who is O’Leary’s principal trainer, and it is the concentration of talent with Elliott and Mullins in particular that sees their British rivals floundering.

Whether the overwhelming dominance that sees the home team trailing 15-6 with a day to go is good for Cheltenham’s famed Anglo-Irish rivalry is debatable. A rivalry only exists if its competitive and it was noticeable how the racecourse atmosphere seemed a little muted as the day progressed.

The Cheltenham festival prides itself on constantly evolving but a ‘ho-hum’ element to proceedings is hardly good.

None of which mattered to Balko Des Flos followers as he confounded concerns about the testing going to land with the Ryanair with authority.

“For a normal festival I would have fancied him. I thought his chance lessened the more rain that fell,” admitted Russell who was touch and go to ride at all having hurt his knee in a fall on Wednesday. He credited his colleague Brian Hughes with helping him make it.

“He had an ice machine in his car and I was the last to leave the racecourse last night, along with Brian,” said Russell who had earlier got the better of a sustained duel with Barry Geraghty in the Pertemps Final.

Delta Work just had his nose in front of the JP McManus owned favourite Glenloe in a memorable duel between the sport’s two most powerful owners.

The Storyteller was Russell’s 22nd festival success in all and a sixth of this week for Elliott who won last year’s Leading Trainer Award with the same total. Elliott endured a blank on Tuesday but successive hat-tricks still put him only one behind his great rival Mullins this week.

“It just shows the horses we have in Ireland. Willie and myself are bouncing along, then Henry [De Bromhead] and Pat Kelly, ” Elliott said.

The latter produced Presenting Percy to win the RSA on Wednesday and Kelly’s runner Mall Dini got within half a length of Missed Approach at the line. “The ground might just have done him,” Kelly shrugged afterwards.

The Irish at least can claim Missed Approach’s jockey Noel McParlan who is from Co Down although the winner’s trainer Warren Greatrex caught the general mood pretty well.

“It’s nice to get one back for Britain but the Irish guys are brilliant trainers,” he said. “It’s just nice to be able to come here and compete.”

McParlan however was afterwards suspended for nine days for using his whip above the permitted level from the third last.