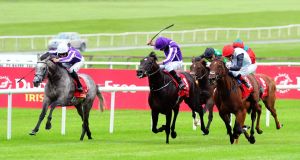 Capri ridden by Seamie Heffernan (left) on the way to winning the Dubai Duty Free Irish Derby at the Curragh. Photograph: PA Wire

It was a third Irish Derby success for Heffernan who powered the second-string of O’Brien’s five-strong team to a neck defeat of the English hope Cracksman. A short head back in third was the champion trainer’s Epsom hero Wings Of Eagles who started a 2-1 favourite.

If there was familiarity in Ireland’s richest race falling to a Coolmore owned horse there was also no surprise about there being a relatively muted reaction.

The run in to the Derby was dominated by the controversial decision to run the Derby at the Curragh despite a 6,000 crowd limit in place due to the €70 million redevelopment of the track.

Despite that limit, an official on-site attendance still only reached 5,412 which allied to temporary facilities inevitably made for a different Derby atmosphere.

As it turned out there were no dramatic tales of irate customers without tickets being turned away. Nor did the temporary facilities seem to be put under pressure during an overcast afternoon in which any rainfall was light.

But despite O’Brien’s ‘Derby Dozen’ statistic and another Classic victory for Heffernan, the restriction figure, and the decision to keep the Derby at the Curragh rather than switch it to Leopardstown, remained at the forefront of many minds.

“I know for sure the English horse [Cracksman] and the French horse [Waldgeist] would not have been here if the race was run somewhere else,” he said.

“It’s clear looking at it now it would have been just a domestic [race] and that’s not what the Irish Derby is supposed to be. You always try to get the best English, French and Irish horses here,” Magnier added.

He added the process involves suffering “some pain for gain” and commented: “The Curragh has done a great job. It’s a pity everyone can’t be here. But if it was run elsewhere, you wouldn’t have John Gosden or Andre Fabre and it would be a domestic affair. It’s hard to please everybody.”

O’Brien acclaimed the Curragh’s mile and a half course as the ultimate test for a three-year-old and added: “We are so lucky to have this track in Ireland. ”

The race turned into a tactical triumph for Heffernan in particular. The veteran Ballydoyle stalwart sat second on Capri off the pace set by the winner’s stable companion, The Anvil, under Ana O’Brien.

For much of the race the five O’Brien horses filled the first five places. Heffernan kicked early and despite Cracksman and Wings Of Eagles shaping as if they would overwhelm Capri, the grey son of Galileo gallantly held on.

“Séamus had a lovely position through the race. I thought he gave him a brilliant ride. He paced it brilliantly, he had a target there and knew the field was coming but he timed it to perfection,” O’Brien said.

Heffernan, who won in 2007 and 2008 with Soldier Of Fortune and Frozen Fire, reported: “He has been competing in very good races all year and the Curragh suited him. I was always comfortable in my position and he galloped to the line.”

Capri finished out of the money behind Wings Of Eagles at Epsom but Heffernan explained: “At Epsom I was planning to be a bit closer but being the track it is I didn’t jump and couldn’t be that bit closer. I had to move a little earlier than ideal. It’s great it looks like he’s improving.

“The Epsom Derby is the clash of the best around and what runs in that race usually split up and win the best races around.”

Bookmakers reckon stamina is Capri’s strongpoint and cut him to 6-1 for St Leger glory at Doncaster in September.

Pat Smullen rode Cracksman for the first time and said: “He ran an excellent race but he got a little further back than we had planned.”

The topic of the crowd restriction controversy was never far away however and the Curragh’s chief executive Derek McGrath said extensive coverage of the decision to keep the Derby at the Curragh rather than switch it to Leopardstown had at least one upside from the track’s perspective.

“At least the coverage gave people the clear message that it is all-ticket,” said McGrath who was unhappy with certain elements of the criticism directed at the decision to keep racing at the Curragh – both this year and in 2018 – during building work.

“I think it’s been unbalanced in terms of what we’re trying to do from our perspective,” he said.

“A lot of energy and determination has gone into the funding for a project that will benefit the whole industry. And if people weren’t as single-minded we possibly wouldn’t be as on target as we are for a project that is building this place for the future,” McGrath added.

He estimated ticket and hospitality sales for the Derby card at just under 5,000.

Colm McLoughlin, head of Dubai Duty Free, expressed satisfaction with the company’s 10th Derby sponsorship and added: “I’m very happy with the temporary facilities. I think they look fantastic, and the project here is fantastic.”

Flat racing’s royalty may have felt a frisson of dread after the top National Hunt trainer Gordon Elliott struck in the Group Two Gain Railway Stakes – often a stepping stone towards the following year’s Classics – when Beckford made it two out of two.

Beckford was bought by Maurice Regan’s Newtown Anner Stud after his debut success at HQ and that looks a shrewd move now the Bated Breath colt is a 20-1 shot for next year’s 2,000 Guineas. The decision to keep him with jump racing’s most upwardly mobile trainer looks even more shrewd. Not that Elliott is planning any major switch of codes anytime soon.

“In the summer it’s something nice to do. It’s a bit of fun and something different but I’m a National Hunt man and you have to remember where your bread and butter is.

Nevertheless Beckford goes next for Group One glory at the Curragh in next month’s Phoenix Stakes.

Johnny Murtagh tasted Irish Derby success four times during his illustrious riding career and hit the mark on the card when True Valour bounced back from a strenuous Royal Ascot effort to land the Listed Celebration Stakes.

The local trainer was happy to credit the 6-1 victory to jockey Shane Foley who navigated a route up the inside rail to eventually emerge half a length clear of the 2-1 favourite Sea Wolf.

“It was a brilliant ride. The ride won it. Coming down the hill I thought we’d need luck but he got the gap and in fairness the horse was able to take it,” said Murtagh of his winner who carried the colours of Qatar Racing.

“He seems to be thriving on his racing and down the line the Hungerford Stakes at Newbury might suit him. That’s a stiff seven furlongs,” he added.

The evens favourite Only Mine got the better of the veteran Gordon Lord Byron in the Listed Creekside Dash Stakes.