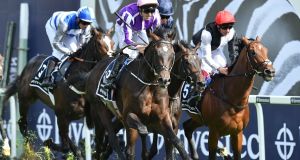 Epsom hero Wings Of Eagles will face eight rivals when he bids to follow up in the Dubai Duty Free Irish Derby at the Curragh on Saturday.

The son of Pour Moi was a shock 40-1 winner of the premier Classic four weeks ago, providing trainer Aidan O’Brien with a sixth victory in the race.

The Ballydoyle maestro has saddled a record 11 previous winners of the Irish Derby and Wings Of Eagles is, along with Capri, Douglas Macarthur, Taj Mahal and The Anvil, one of five Ballydoyle representatives in this year’s renewal.

British hopes rest upon the shoulders of the John Gosden-trained Cracksman, who was just a length behind Wings Of Eagles when third at Epsom.

Gosden, who broke his Irish Derby duck with Jack Hobbs in 2015, was quick to snap up the services of jockey Pat Smullen to replace the sidelined Frankie Dettori.

The Jim Bolger-trained Dubai Sand and Grandee from Jessica Harrington’s stable make up the home team.

Padraig Beggy steered Wings Of Eagles to his surprise Epsom success, but is replaced by Ryan Moore this weekend. Seamie Heffernan partners Capri, Donnacha O’Brien rides Douglas Macarthur, Wayne Lordan is booked to ride Taj Mahal and the trainer’s daughter, Ana O’Brien, is on The Anvil.