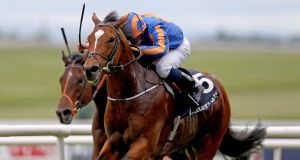 Gleneagles has a favourable draw in stall five of the 10 runners next to American Pharoah. Photograph: Donall Farmer/Inpho

Gleneagles is rated a 20/1 outsider in some US betting forecasts for Saturday night’s $5 million (€4.5 million) Breeders’ Cup Classic, a race that could confirm the Triple Crown hero American Pharoah as the world’s top-rated racehorse for 2015.

The race’s self-styled billing as the sport’s ‘world championships’ appears set to carry some credibility this year as the two top-ranked thoroughbreds on the planet are due to appear at Keeneland.

American Pharoah is rated a 6/5 favourite to end his career with a Classic success but the English-trained superstar Golden Horn is an even shorter 4/5 market leader in local betting for the $3 million (€2.7 million) Turf.

Both outstanding three year olds dominate the top of the International Federation of Horseracing Authorities’ handicap rankings for 2015, with American Pharoah rated on 131 and Golden Horn on 130. The French star Treve trails them in third on 126.

Both Free Eagle and Order Of St George are the highest rated Irish-trained horses on the list on 123, 1lb ahead of Gleneagles. Theoretically Saturday night’s action could decide who tops the rankings this year but with Golden Horn’s principal rival likely to be Aidan O’Brien’s filly Found, even a comprehensive Turf success might not be enough for Golden Horn to displace his American rival on handicap ratings.

In contrast, the cream of America’s dirt performers are due to tackle American Pharoah, including the dual-Breeders’ Cup heroine, Beholder and the top older horses, Honor Code and Tonalist.

Although Gleneagles is as low as 12/1 in some European ante-post lists to finally secure the Classic for Aidan O’Brien, the dual-Guineas hero is almost twice those odds in the US, despite a favourable draw in stall five of the 10 runners next to American Pharoah.

O’Brien has twice finished runner-up in the Classic with Giants Causeway (2000) and Henrythenavigator (2008), while Declaration Of War was third to Mucho Macho Man two years ago. But other star names such as Galileo and Hawk Wing have notably failed to cope with the transition to dirt.

Ireland’s champion trainer has won eight Breeders’ Cup races in total, with half of that tally coming in the mile-and-a-half turf. However, just two victories have come on dirt – Johannesburg’s 2001 Juvenile and Man Of Iron in the 2009 Marathon.

O’Brien has won the Juvenile Turf twice with George Vancouver and Wrote but his hopes for adding to that were dented when the ante-post favourite Hit It A Bomb was drawn widest of all for Saturday’s race in stall 14. His other hope, Shogun, is in stall four, while O’Brien’s Dirt Juvenile Filly favourite Alice Springs is in stall three.

Ground conditions at Keeneland are forecast to be ‘good’ at best by European standards for the Breeders’ Cup, which begins on Friday night.

Ireland’s other main Breeders’ Cup hope, Legatissimo, is rated an 8/5 favourite in the US to complete a notably successful season in the Filly & Mare Turf, a race that overseas raiders have won 10 times since it was introduced to the programme in 1999.

1 Farrell and O’Connell provide insight into changes in Ireland’s analysis
2 Sideline Cut: Vignette shows why Bird is the true shark in The Last Dance
3 Andrew Porter diary: Meat, veg and intermittent fasting the order of the day
4 Aidan O’Shea sees both sides of the equation when it comes to professionalism
5 Louise Galvin’s rugby career on hold for work on the frontline
Real news has value SUBSCRIBE

Anfield and Cheltenham show sports again lacking in looking after their own 07:00
Louise Galvin’s rugby career on hold for work on the frontline 06:30
Jack McCaffrey praises GAA’s community effort during Covid-19 outbreak 06:00
Aidan O’Shea sees both sides of the equation when it comes to professionalism 06:56
Farrell and O’Connell provide insight into changes in Ireland’s analysis 06:00
Here is your handy guide to sport on television this week