Bernard Dillon: The Derby-winning jockey from Kerry who had it all and lost it all 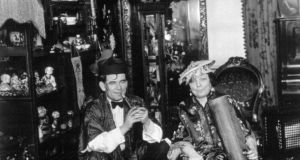 On the greatest day of his sporting life, a still photographer captured Bernard Dillon being led to the winner’s enclosure at the 1910 Epsom Derby, a rail-thin figure aboard Lemberg, their post-race procession backgrounded by rolling hills of flat-caps and straw boaters stretching back into the stands. A sepia moment from a time when jockeys’ faces adorned cigarette cards and they were as famous as footballers are now. Not even a decade after he left Kerry, at the peak of his career. Near enough the end of it too.

“Is this man your lawful husband?” asked the immigration inspector on the New York dock.

“No,” said Lloyd, after a brief moment of hesitation, “he is not.”

“Then I must request you both to go back on board.”

Refused entry as “undesirables”, Lloyd initially teared up then gathered herself enough to produce a bottle of champagne from her valise. She and Dillon promptly quaffed from it, before striding defiantly back up the gangplank to their state room. The incident made the front page of the New York Times and newspapers across the world. Such was the wattage of their celebrity. He was the recently superannuated horseman (the Jockey Club withdrew his licence for repeated betting infractions), she the darling of the English music halls.

The Posh and Becks of Edwardian Britain had booked passage as Mr and Mrs Dillon and he was charged with moral turpitude for travelling with a woman not his wife. Appeals were made to Washington, both spent nights in cells on Ellis Island, and, eventually, they were allowed to stay under certain conditions. Bonds of $1000 each were posted and they agreed not to cohabit during Lloyd’s nine-month engagement with North American theatres that were paying her $1500 per week to perform risque Vaudeville schtick.

Near the tour’s end, news came through of her second husband’s death and the duo were married by a Catholic priest at the British Consulate in Portland, Oregon. A ceremony deemed important enough to be flashed across international newswires.

Born in Caherina near Tralee in 1887, Dillon learned to ride on the family farm where his father Patsy deployed unorthodox teaching methods. To prepare his children for the rigours of the sport, he placed them on yearlings then tied their legs together beneath the horse so every fall yielded a violent trashing and a disincentive to repeat the experience. At 14, Bernard followed older brother Joe to England to take up an apprenticeship. No ordinary apprenticeship either.

Under trainer Jack Fallon, he became the preferred jockey of the Druid’s Lodge Confederacy, a quintet of dodgy high rollers headed up by Percy Cuniffe, a gold speculator. Using the services of a crooked vet, the consortium bought supposedly finished horses cheap in Ireland, then trained them in great secrecy at a cloistered stables near Stonehenge before pulling off lucrative betting coups.

Having won his first race at just 15, Dillon could be trusted to deliver on days they had wagered most. From there, he pieced together an impressive, if truncated, resumé that included victories in the Thousand Guineas (twice), the Jockey Club Stakes (twice), the Cesarewitch, the Grand Prix de Paris, the Cambridgeshire and the Liverpool Cup.

“Some casual racegoers have a notion that a jockey’s working day begins and ends between the tape and the winning post, and that, the race over, a lively party of friends shake him by the hand and escort him off to an elaborate dinner and the latest play,” wrote Dillon in a 1908 book about the life of a jockey. “But, such, alas, is not the case.”

Except it was one time when Dillon, near the peak of his powers, was introduced to Lloyd, 18 years his senior, at her daughter’s wedding. A tumultuous love affair ensued, both partners having problems with drink and the celebrity’s overweening sense of entitlement. When he served in the Machine Gun Corps at Belton Park during World War 1, he regularly went AWOL and Lloyd often travelled to the base to berate the officers in charge for daring to discipline him.

In June, 1917, Dillon was sentenced to one month in prison for assaulting his wife in London. Not his first offence. Nor the last. There was a litany of such incidents. The night she caught him in bed with another woman and they both beat Lloyd up. The day he was arrested for attacking her father. Their troubles became such regular tabloid fodder that more than half a century later, Barbara Windsor (then in her “Carry On” pomp) and Maurice Gibb of the Bee Gees played the ill-starred couple in a West End musical called “Sing a Rude Song”.

Towards the end of her career, Lloyd, her powers waning with her health, incorporated the events of her well-publicised personal life into her act, singing “I’m a bit of a ruin that Cromwell knocked about a bit”, a ditty fans felt was about Dillon. For her funeral in 1922, 100,000 people lined the streets of London and TS Eliot wrote an encomium for “the greatest music hall artist in England”, lauding her unique “capacity for expressing the soul of the people”. Dillon was a night porter in an apartment block near Trafalgar Square when he died two decades later. Without fanfare or mourning.