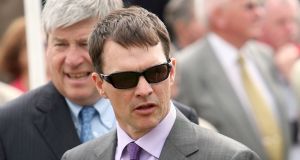 It is 20 years since Urubande became Aidan O’Brien’s first Cheltenham festival winner, and Aspen Colorado could earn the chance to try and secure another O’Brien Cheltenham “first” with a victory at Leopardstown tomorrow.

Although the man in charge of the world’s most powerful flat string officially trains Aspen Colorado, his son Joseph oversees the day-to-day handling of the horse at the family’s rejuvenated Piltown stables.

O’Brien Jnr is awaiting confirmation of his own trainer’s licence but the former dual-champion jockey’s alliance with JP McManus is an evocative hark back to the glory days of when his father memorably saddled Istabraq to a Champion Hurdle hat-trick.

Aspen Colorado is as low as 10-1 for the Weatherbys Champion Bumper at Cheltenham on the back of his impressive debut success over the subsequent winner Without Limities last month.

Very soft ground conditions will hardly be ideal for a son of Galileo but it will be a surprise if he does not follow up.

A third festival possible for the stable remains Draco, who is due to line up in tomorrow’s conditions hurdle.

Draco remains an entry for the County Hurdle but has been overlooked for tomorrow’s race by Barry Geraghty who will instead ride the McManus-owned French import Great Field, who has three festival entries of his own and is as low as 16-1 in ante-post lists for the County. Great Field won two of his three starts over flights at Lyons in the autumn of 2014 but has not raced since.