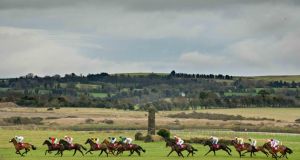 A general view of the field in the second race at Punchestown today. Photograph: Morgan Treacy/Inpho

Arvika Ligeonniere enjoyed a facile success for the Willie Mullins team after stablemate Sir Des Champs made an early exit in the John Durkan Memorial Punchestown Chase at the Co Kildare track.

The field had been reduced to three when last year’s winner Flemenstar was taken out on Saturday and there was drama as early as the third fence where Sir Des Champs fell.

That left Arvika Ligeonniere to lead the only other runner Rubi Light for the rest of the two and a half mile Grade One.

The 4-7 favourite never looked in any danger with Ruby Walsh enjoying an armchair ride. Rubi Light was held when ploughing through the final fence and was eventually beaten by nine lengths.

Walsh said: “The fences are there to be jumped, but it’s very unlike Sir Des Champs to make a mistake like that, but that’s racing I suppose.

“My fella jumped well bar the first down the back.

“He’s got lots of pace and great scope for jumping. If he was mine I’d be inclined to go back in trip. Why hold him back in a longer race and not play to your strengths. but it’s up to Willie and connections what they want to do.”

Following his heavy fall from Sir Des Champs Davy Russell was stood down for the rest of the afternoon.

Mullins’ son and assistant, Patrick, said: “Sir Des Champs seems fine. He walked away, it was just one of those things.

“At least it’s a long way from March and hopefully he’ll be OK in the morning. All being well he’ll go for the Lexus at Leopardstown.

Of the winner, he said: “He’s probably better going right-handed, but he has won a Grade One around Leopardstown and he could drop back in trip.”

Arvika Ligeonniere’s owner Rich Ricci told At The Races: “He jumped really well, he has really come on from his novice season.

“It’s a shame was happened to Sir Des Champs but he’s up and around which is good and it’s a pity Flemenstar wasn’t here for Punchestown.

“Our lad was good today and I’m not sure if anything would have beaten him.

“When he attacks his fences he is beautiful to watch. It’s a lovely thing to see.

“I’m not sure what we will do now, but he seems a different horse this season to me.

“We talked about dropping him back in trip just after the race. There’s the Dial-A-Bet Chase (Leopardstown, December 27) and a two-five race at Ascot (Betfair Ascot Chase, February 15) coming up. I’d be happy to drop him back (in trip).

“He’s more exciting to watch over the shorter distances.”