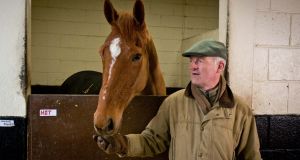 Annie Power heads a final field of 13 for the Stan James Champion Hurdle at Cheltenham on Tuesday after every horse stood its ground at the 48-hour final declaration stage.

The mare was supplemented at the confirmation stage last Wednesdsay, as expected, due to an injury to last year’s winner Faugheen.

Both Faugheen and Annie Power are owned by Rich Ricci.

Ruby Walsh will ride Annie Power, the number one for the Willie Mullins team with Paul Townend aboard Nichols Canyon.

The home team is headed by The New One, having his third run in the race for Nigel Twiston-Davies.

Nicky Henderson is responsible for five of the starters — the long-absent My Tent Or Yours, last year’s Triumph Hurdle winner Peace And Co, Hargam, Sign Of A Victory and Top Notch.

Lil Rockerfeller, who was the other supplementary entry, takes his chance for Neil King while Robert Walford’s Camping Ground and the Paul Nicholls-trained Old Guard complete the list.

Nicholls revealed he was disappointed with Old Guard’s work on Saturday and a final decision about his participation will be made on Monday morning.

“I have declared Old Guard for the Champion Hurdle on Tuesday as he worked much better this morning,” Nicholls said.

“But after he cooled off he was very slightly stiff behind for the second day running.

“My head lad Clifford Baker and I wonder if he has a minor muscular issue somewhere and we will be moving heaven and earth to get Old Guard spot on for Tuesday.

“But after speaking to his three owners earlier today I agreed that we will not be making a firm decision about his participation in the Champion Hurdle until he schools over eight flights of hurdles at home tomorrow morning.

“And if we are unhappy with Old Guard in any way after that then of course he will not be going to Cheltenham.

“But if he schools well and is fine afterwards then he has every chance of running the next day.

“By his usual standards it was a little disappointing and afterwards he showed minor signs of stiffness behind once he cooled off.

“But last night he was 100 per cent sound and again this morning before our vet Buffy Shirley-Beavan checked him over and gave him a clean bill of health before his work out.

“Either way we will keep people informed of the situation.”

Meanwhile Vroum Vroum Mag is among 20 horses declared for the OLBG Mares’ Hurdle on Tuesday.

Mullins is looking for an eighth consecutive victory in this race after six-time heroine Quevega, winner from 2009-14 and Glens Melody 12 months ago.

With Annie Power being withdrawn Vroum Vroum Mag is certain to go off a short-price favourite to continue the Mullins dominance of the mares’ showpiece after he failed to win the first ever running in 2008.

Vroum Vroum Mag has won all her eight starts for the Mullins stable — the first six over fences and the last two over hurdles.

Mullins has also left in Gitane Du Berlais but he took out his other possible, Whiteout.

Flute Bowl will try to justify her supplementary fee having been added to the field at the confirmation stage by trainer Gary Moore.

Other runners include Bitofapuzzle, Keppols Queen, Polly Peachum, Aurore d’Estruval and Tara Point while the remaining withdrawals were Ballychorus, Jessber’s Dream, Katie Too and Smart Talk.