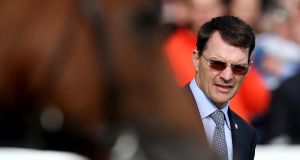 Although Bondi Beach heads a team of 11 running under the Aidan O’Brien banner in Ireland this weekend, the champion trainer’s Sunday focus will be resolutely on a classic double in France with The Gurkha and Alice Springs. It is almost a decade since Astronomer Royal gave O’Brien the last of his three victories in the French 2,000 Guineas and The Gurkha is a 9-2 second favourite for Sunday’s €550,000 Poule d’Essai des Poulains. The race is off at 3.20pm Irish time.

Just over an hour prior to that, Alice Springs will try to emulate Rose Gypsy (2001), who landed the Poule d’Essai des Pouliches for O’Brien. She is as low as 11-4 favourite to go two places better than her third to Minding in the Newmarket Guineas a fortnight ago.

Longchamp’s redevelopment sees the French Guineas races run on Deauville’s famous straight mile this year, ruling out the sort of draw issues which have plagued some renewals in the past.

O’Brien has already indicated that The Gurkha’s classic ambitions could be kept to France, with the Prix du Jockey Club an option instead of Epsom in three weeks’ time, although, significantly, Ladbrokes is still only 10-1 about the Galileo colt for the English Derby.

Another potential element in the murky Epsom picture could come from the Poulains favourite, Zarak, an unbeaten son of the Arc heroine Zarkava, who is as low as 8-1 in one Derby betting list. No French Guineas winner has also landed the Epsom Derby since Relko in 1963.

Zarak and The Gurkha are among 13 lining up for Sunday’s classic, which also sees the in-form Frankie Dettori/John Gosden team represented by Crazy Horse. That combination will take on Alice Springs in the fillies’ classic with Nathra.

The Co Meath-based trainer Ger Lyons is aiming to secure Group One glory on Saturday when last year’s Irish 2,000 Guineas runner up, Endless Drama, returns to action in the Lockinge Stakes at Newbury.

“If he isn’t top class, then I don’t have one. He was second in a Guineas, so you’d like to think that he is,” Lyons said. “His work has been fantastic, but what I’m asking him to do is huge.”

Colin Keane takes the ride on that colt and also the Lyons-trained pair, Medicine Jack and Spader, on the Newbury undercard.

Sunday’s Navan feature is the four-runner Coolmore Vintage Crop Stakes, which looks like it should be a good opportunity for Bondi Beach to continue his successful progress towards November’s Melbourne Cup.

“He ran in the Melbourne Cup last year, and that is a race we’ll have in our minds for this year too,” Aidan O’Brien confirmed.