‘Quiet please’ for the rapidly accelerating death of golf

Tipping Point: The silence, snooty attitudes and sacred rules are all still holding golf back 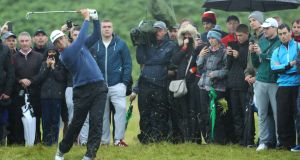 Fans take photos of Jon Rahm as he plays his second shot at the 13th during the final round of the Dubai Duty Free Irish Open at Portstewart. Photo: Warren Little/Getty Images

It’s just a sport, lads. Always remember that about golf. When they peg it up for the British Open next week, it can be a useful nugget to keep in mind. Not least if you need to fend off the crashing bore mansplaining you into calling it the Open Championship. Resist these dangerous fossils. These precious dweebs. These dreary fussbudgets.

Just a sport, golf. Not a religion, not a holy text. Not sacred. Not special. Just a sport. Played by human beings, all of them made of the same venal, flawed scumbaggery as play every other sport on the planet.

Golfers. Can’t listen to them, can’t wrap a hybrid around their polo necks. Never deliberately more than three sentences away from telling you something you already know. Forever taking outsized credit for a game that should be far more popular than it is. Never stopping to think that they might be the reason that one of the greatest sports ever conceived is dying on its feet.

Every statistic you see about golf these days makes for the sort of graph that causes a banker to tell the barman to leave the bottle. Participation rates? Down. Viewership figures? Way down. Industry markers? Gone south. The world’s biggest sports company built a two-decade campaign around the two most marketable golfers in history and still couldn’t make the golf equipment game pay.

And so golf, a sport which never considered itself a world-stage kind of player before Tiger came along and gave it no choice in the matter, is carried along now by the belief systems of two distinct factions. For every earnest worrier about golf’s place among the nations of the sporting earth, there are clubhouses filled with old farts who are juuust fine with things the way they are.

The upshot is that every attempt made to shave some of the more fusty edges off golf is met with resistance, confusion and often barely-disguised contempt. Bigger holes, fewer rules, Golf Sixes, whatever else. Golf is St Augustine’s prayer adapted and updated, scrawled on a scorecard and pinned on the Hon Sec’s noticeboard. Make me modern, Lord – but not yet.

The latest small step for man is allowing people to bring their phones into the Irish Open last week to take pictures. This single bound into the 20th century was presented to the public as a concession, replete with a staged video released by the European Tour of Rory McIlroy at his most snotty, throwing a guy’s phone in a bin for taking a snap on his phone without first putting it on silent. The message, as ever with golf, was you are free to do what you’re told.

What is golf’s obsession with silence, anyway? How and when did we agree to it? Who do we see about that? The glowering huff put on by golfers at the merest click of a gnat’s knees in an adjacent field is always human life at its prissy worst. Especially at a professional tournament.

Golf is already easily the worst spectator experience in sport. You are never where you need to be to see the action that matters. And if you are, there’s always somebody standing in front of you. Even if there isn’t, you’re afraid to so much as rustle a chewing gum wrapper in your pocket, lest you bring the gaze of a vengeful golf crowd upon your shame.

But when you think about it, there’s no obvious reason why people who have paid through the gate should feel in the least bit shy about continuing normal inter-personal communication. The ticket cost 50 quid, you had to get out of bed at 5am, the tented village is a swizz, the burgers are cold and the drinks are warm and overpriced. You walk all day, the car-park is a half-marathon away and on top of it all, you’re supposed to act like you’re doing all of this in a library.

Worst of all, golf fans put up with it. They readily accede to being told where to stand, when to clap, what to take out of their pocket. Imagine being shushed at a sporting event as a grown adult and being okay with it.

It’s all built on the ridiculous misconception that golf needs silence. Hogwash. Golfers already have open space, bespoke equipment, pristine landscapes and nobody hitting them a fair shoulder or coming in with sliding tackle. The notion that they wouldn’t be able to function with a crowd shouting at them from outside the ropes – or even just talking like people in crowds talk – is a nonsense.

So it might put them off their stroke. So what? They’re. Playing. A. Sport. Just like a free-taker lining up a shot in soccer, hurling, basketball or any of the dozens of other sports. Why is golf any different?

They are not performing open-heart surgery. They are not lab-testing a vaccine. They are not a member of a bomb-disposal unit. They are gilded stowaways on one of life’s most exclusive cruise-liners. They shouldn’t get to give out about engine noise.

Shane Lowry said there’d be “carnage” at the Irish Open because of the new phone rule. There wasn’t. It was all grand.