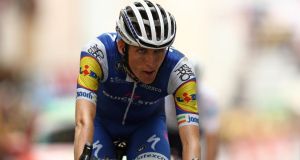 Dan Martin in action during the the ninth stage of the Tour de France on Sunday. Photograph: Bryn Lennon/Getty Images

Dan Martin crashed twice on an action-packed ninth stage of the Tour de France on Sunday as he slipped back to sixth place on general classification.

Martin crashed in to the back of Richie Porte after the Australian went off the road into a wall of rocks on the final descent to the stage finish at Chambery.

Porte, seen as one of the main rivals to his Sky team-mate Chris Froome, was taken to hospital, his tour over at the end of the first week.

“He was conscious, it’s reassuring, he is being transferred to the hospital,” race doctor Florence Pommery said of Porte.

Quick-Step Floors rider Martin got back on his bike after he took a new wheel from a neutral support vehicle. Unfortunately for Martin, his brakes didn’t work with the new wheel and he crashed into a wall almost immediately before limiting the damage on the line. He is now sixth overall, 1:44 minutes behind Froome, who claimed a third-place finish on the stage.

The defending champion, who was attacked by Fabio Aru just as he suffered a mechanical on the last climb, held on for a podium finish at the end of a 181-5km trek in the Jura mountains won by Colombian Rigoberto Uran ahead of France’s Warren Barguil.

“I had a mechanical problem with my gears, I had to change bike,” said three-times champion Froome.

“I want to thank the other riders, who did not attack,” he added, saying he did not see Aru attacking past him as he raised his arms to ask for assistance.

He was already without team mate Geraint Thomas, who abandoned after crashing in the slippery descent of the Col de la Biche, one of three out-of-category ascents of the day.

Overall, Froome leads Aru by 18 seconds and Romain Bardet by 51 as two-times winner Alberto Contador of Spain cracked on the last climb and dropped out of contention.

Uran is fourth, 55 seconds off the pace while Astana look set to work as a double act from now on as Dane Fuglsang is fifth, 1:37 behind Froome.

Three-times podium finisher Nairo Quintana of Colombia also struggled, losing 1:15 to Froome and his group. He is now eighth overall, a massive 2:13 off the pace.

Monday is a rest day and the fight for the overall title is set to resume next Thursday with the first big Pyrenean stage.