Pioneering basketball coach Gregg Popovich gets most out of Spurs 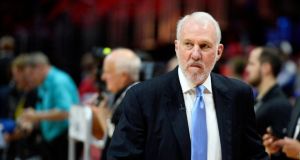 Gregg Popovich was one of the first NBA coaches to start seriously trawling overseas for talent, the constant influx of under-rated international players has helped Spurs to a quintet of titles. Photograph: Paul Buck/Epa.

Every profile of Gregg Popovich seems to begin or end with a profound quote that hangs in the San Antonio Spurs’ locker-room. Specifically chosen by the coach to contrast with the trite sloganeering that usually wallpapers these venues, it may also be the most perfect embodiment of the relentless spirit evinced by his team en route to winning five NBA titles in the past 15 years.

“When nothing seems to help, I go look at a stonecutter hammering away at his rock perhaps a hundred times without as much as a crack showing in it,” wrote Jacob Riis, the social activist and writer. “Yet at the hundred and first blow it will split in two, and I know it was not that blow that did it, but all that had gone before.”

The fact those lines have had to be translated into Spanish, French, Slovenian, and Portuguese, among other languages, speaks to the uniquely polyglot nature of the Spurs’ squad, and to the unlikely road Popovich himself has travelled to NBA greatness.

The finest basketball coach of his generation did a degree in Soviet studies and began his working life as an intelligence officer for the United States Air Force, based out of Diyarbakir on the Turkish-Syrian border in the early 1970s.

“People had me carrying guns like I was some kind of spy,” said Popovich. “The more I would deny it, the more they’d roll their eyes and say, ‘Yeah, sure. Come on.’ I was stationed on the border, but it wasn’t like I was James Bond. ”

Witness his performance in a press conference following the Spurs’ resounding and troubling defeat by the Los Angeles Clippers in their first play-off game of the campaign last Sunday. Popovich was, by turns, so rude, dismissive, condescending and occasionally even funny in the way he poured scorn on typically benign post-match questions that the video of it instantly went viral. Given his avowed disinterest in the limelight afforded by becoming just the ninth coach ever to win 1,000 games earlier this year, nobody was too surprised at his refusal to engage with the media.

This is a man who’s regularly campaigned against in-game live television interviews with coaches, treating his mandatory participation in those cringe-worthy farces as an opportunity to expose how utterly ridiculous the practice is.

While the NBA has never disciplined him for making journalists thrusting microphones under his chin look stupid, it has fined him for resting his biggest stars for certain fixtures during the over-long 82-game regular season. The more he’s done that and the more his club has won, however, the more critics have begun to realise the wisdom of the tactic, especially since the Spurs’ dynasty is built around an ageing triumvirate in Tim Duncan, Manu Ginobli and Tony Parker.

Born and bred in the basketball hotbed of Indiana, it’s somehow fitting that this son of a Serbian father and Croatian mother has achieved so much with sides bulwarked by a trio of icons hailing from St Croix, Argentina and France. One of the first NBA coaches to start seriously trawling overseas for talent, the constant influx of under-rated international players (Parker and Ginobli were 28th and 57th picks in the draft) has helped the unfashionable Spurs to a memorable quintet of titles, a feat something akin to Stoke City regularly contending for and winning the Premier League.

While some foreign players initially struggle to decipher Popovich’s love of sarcasm, all quickly discover his worst rants are those moments when a vein bulges at the side of his head, a tendency his charges call “going Serbian”. Whatever he does, it works.

So far, he’s eschewed the traditional successful American coach ritual of publishing a cash-in book about management to flog to corporate warriors. It would certainly be an interesting read because he’s constantly evolving. Closing in on two decades in charge, amid speculation about this season may be being his last, Popovich revamped his backroom team.

He brought in Becky Hammon, a retired WNBA star, making her the first full-time female assistant coach in the history of the league. And he also added Ettore Messina, a legendary Italian coach from the Euroleague, to his staff. Either move would have been groundbreaking on its own, to do both in the space of a few months demonstrated his appetite for growth and enduring willingness to take risks.

“This Duncan guy, this Ginobli guy, and this Parker guy, they are pretty important to me being successful,” said Popovich in a speech to US Air Force Academy students a while back. “Like, if I didn’t have them, I would be coaching in the Budweiser League someplace. And I know that. A lot of people don’t know who they are. I know who I am.”