The NFL at Wembley: How to get there, how to get tickets and more 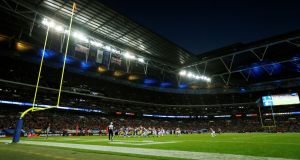 The razzmatazz and cast of hundreds of the NFL will bring its European leg of the 2019 season to a close in London with the fourth game at the world-renowned Wembley Stadium. Two have already been played at the brand new Tottenham Hotspur Stadium and one at Wembley.

The Oakland Raiders beat the Chicago Bears in the first fixture of the London series with the Carolina Panthers losing to the Tampa Bay Buccaneers at Spurs’ ground, and the LA Rams beating the Cincinnati Bengals 24-10 in their Wembley match last weekend.

This Sunday (November 3rd) will see the Houston Texans play the Jacksonville Jaguars. The Jaguars first announced a partnership with London in 2012, which was team owner Shahid Khan’s first year with the franchise.

That ensured a home game in London in each of the next four seasons. Pleased with the crowds throughout the first three years of the deal, Khan later extended the agreement through the 2020 season.

It is a fun day and doors open early. But just be aware of the NFL bag policy, which restricts ticket holders to size and shape. They operate a sporting version of Ryanair. A good place to start is - http://www.wembleystadium.com/events/2019/houston-texans-v-jacksonville-jaguars

With Aer Lingus, flying to Heathrow from Dublin on a red eye on Sunday morning and then getting a red eye back on Monday will cost €174 return. Ryanair arriving to Luton at 9.30am and back on Monday 3.35pm is €110. There are too many other options to list. London City is also reasonably convenient although it’s a short DLR hop and a longish tube ride. The best tube station at the venue is probably Wembley Park.

With an afternoon start time of 2.30pm there’s no need to stay in the adjacent hotels unless you want that convenience. It’s a short walk to the tube station which will get you to central London quickly, where you can pick your hotel at any rate from €50 to €5000 a night.

Quoted prices for hotels beside the stadium for one adult for one night on the Sunday are: Novotel €203, Ibis €122, Wembley Park €109, Holiday Inn €184, Hilton London Wembley €202, Best Western Plus London Wembley Hotel budget - single room €115.