Why elite athletes should be afraid - maybe very afraid - of coronavirus? 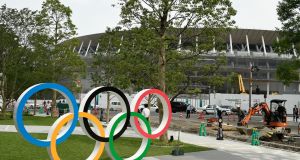 The new National Stadium in Tokyo, Japan, which will host a major part of the 2020 Olympics. Photograph: Matt Roberts/Getty Images

It’s a strange feeling to wake up and suddenly realise the Olympics have been cancelled. Or at least postponed for a few months, which is what they’re saying for now. Yet the whole world knows the chances of any global sporting event going ahead this year in the face of a fast-spreading and potentially deadly viral pandemic are hovering somewhere around zero. Time will tell – the fear being there may not be enough of it.

Hang on... only later when pouring my first black coffee of the morning did it suddenly dawned that I’d dreamed up this scenario overnight, the uncertainty around Tokyo this summer already playing tricks on my mind.

And I’m only going to report. For any athlete going to compete or still trying to qualify these must be properly worrying times, and it’s hard to know what would be the least-worst decision at this point.

I was thinking of two Irish athletes in particular: Seán Tobin and Aoife Cooke have already gone to considerable lengths to put themselves in the best possible position to qualify for the Olympic marathon.

Tobin has been training in Australia since the start of the year, the extreme bushfires already upsetting his schedule in preparation for the Hamburg marathon. Cooke has spent six weeks in the high altitudes of Kenya in preparation for the Vienna marathon – both those races, originally set for Sunday, April 19th, were postponed this week due to the coronavirus.

What next? The deadline for Olympic marathon qualification remains May 31st, when it’s highly unlikely there will be another big-city marathon before then.

What exactly World Athletics needs to do about that window of Olympic qualification is a story for another day. For now Tobin will likely head to the US and turn his attention back to the track to keep his Olympic dream alive. Age 25, he may get another chance anyway.

Cooke, at age 33, may feel less certain about that, and yet sounded suitably sensible on Twitter on Thursday when describing her initial upset at the postponing of Vienna as “knee-jerk and admittedly selfish”, especially as it’s becoming increasingly clear in recent days just how serious Covid-19 actually is.

“My long-term goals in the marathon extend far beyond just this year,” she wrote. “There may be no more races over the next few months, but we can all get out and run for ourselves, for enjoyment, because it’s what we love to do.”

There is another reason to be sensible about all this when it’s perhaps only now dawning on all elite athletes why there is another good reason to be afraid, maybe very afraid, of the coronavirus – and not just when it comes to cancelling or postponing their Olympic dream.

You shouldn’t need an Ivy League degree in biology – or me for that matter – to know that any strenuous exercise can compromise the immune system, especially when it comes to upper respiratory tract infections. For the elite athlete – runner, swimmer, cyclist, rower, whoever – this lesson has often come from experience, personal or otherwise. If that’s not you coughing and spluttering after another particularly hard race then it must be your team-mate.

It’s known in the sports science business as the J-curve, because while moderate, regular physical training does generally boost the immune system, a single bout of strenuous endurance exercise is typically followed by temporary immunosuppression – turning the corner of the J.

The extent and duration of this suppression often depends on the exact nature of the event, and I know that from writing a college paper on it back in the day and also from not changing out of a sweaty wet running vest straight after the Honolulu marathon.

In other words none of this is news, and a study as far back as the 1902 Boston marathon identifying increased white blood cell counts in the runners that finished. Yet it does create a new scenario in the face of Covid-19, and the question of whether or not the elite athlete may be more open to infection.

Whatever about that mass Petri dish at Cheltenham, there was also good reason to fear the big city marathons going ahead, when all those finishing were hanging around afterwards with suddenly compromised immune systems. Especially if running low on carbohydrate too.

Cycling, a sport which seems prone to chronic respiratory tract conditions such as asthma, presented some of the first cases of Covid-19 in elite sport. Colombian sprinter Fernando Gaviria was the second pro rider to have tested positive after Russia’s Dmitry Strakhov, both arising from the abandoned UAE Tour earlier this month.

The Bahrain McLaren team were the first to pull out of Friday’s Stage 6 of Paris-Nice, around the same time it was announced the 2020 Giro d’Italia is to be postponed.

Some of the better running websites have also been addressing the matter this week, with links to medical journals which have only now began to publish some initial studies on Covid-19 patients.

What appears certain for now is that as well as being spread by droplets of coughs and sneezes, the virus heads straight for the lungs, accessing host cells via the enzyme ACE2, which is most abundant in the alveolar cells of the lungs. It’s also possible ACE2 might be the path for the virus to assault the heart, causing damage there too.

For the vast majority of fit and healthy elite athletes none of this would be deadly, although a dose of Covid-19 closer to the Olympics might well compromise their season, even if they did manage to qualify for Tokyo. The fear is that some of the initial studies on recovered Covid-19 patients suggest there may be some permanent scarring in the lungs, and if allowed to spread to other organs may also cause liver damage.

According to an ahead-of-print article in the American Journal of Roentgenology (AJR), Covid-19 does show “significant overlap” with severe acute respiratory syndrome (Sars), which can impact on long-term exercise capacity. Another paper posted in the same journal noting recent reports of mild to moderate liver injury in Covid-19 patients.

Still, it is too soon to be sure if there may be some lasting impact on the elite athlete beyond cancelling or postponing their Olympic dream.

Only time will tell – the fear being there may not be enough of it.