Whereabouts rule harsher on some athletes over others

Ian O’Riordan: Ciarán Ó Lionáird feels almost like he is sitting out a six-month ban 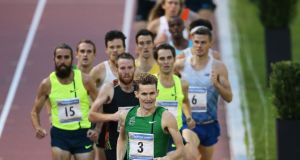 Ciarán Ó Lionáird in action during the Morton Mile in 2014. Photo: Cathal Noonan/Inpho

These are strange days for the distance runner. I rang Ciarán Ó Lionáird during the week to find out was he serious about wanting to come home to run the National Championships next weekend (he put it out there on Twitter), and with that give himself another crack at the 1,500m title he won in 2014.

Even knowing full well that he can’t, whether he wanted to or not, because Ó Lionáird hasn’t yet met the six-month athlete whereabouts rule around his return to national and international events. So he’ll stay in America and pace some 1,500m races instead, which he is okay to do, against some distance runners who are also on athlete whereabouts (where they can be tested on any given day, in their chosen hour window), but chances are haven’t been tested for the best part of six months.

When most of the world went into deep sleep mode back in March, most of the elite athletes in the world with it, there was no telling when - or in what form - competitive sport might return. Even six months seemed reasonably hopeful, at best, especially with the Tokyo Olympics promptly kicked down the calendar for another year, while many other events were being cancelled outright for 2020, and others still are.

With that, drug testing in sport also went into a deep sleep, in part because the process itself was a possible risk in the spread of Covid-19. In-competition testing numbers dropped to zero, and in many sports out-of-competition testing did too. UK Anti-Doping, who releases quarterly figures, carried out just 126 tests between April and June, compared to 2,212 in the same three months last year, with zero testing during that period on professional boxers, tennis players, rugby league players, or in hockey, rowing, triathlon and weightlifting.

There was still some testing going on in the retrospective sense, including on samples still in storage from the 2012 Olympics in London, which under the eight-year statute of limitations, concluded at midnight last Wednesday. After finding only nine positives during the Games, including Belarusian shot putter Nadzeya Ostapchuk, later stripped of her gold medal, and Ghofrane Mohammad, a Syrian hurdler from Aleppo, retrospective testing found another 65, which along with the dozens more proven by the Court of Arbitration for Sport (CAS), including 46 Russian athletes, brought London’s grand doping total to 139 - almost twice as dirty as the previous dirtiest Olympics in Beijing in 2008, which after eight years produced 81 positives.

It was early in this deep world sleep when Ó Lionáird made the overnight decision to move from Eugene in Oregon, where he had been working as a shoe consultant with Nike since repeated injury forced his retirement before the 2016 Olympics in Rio, to Flagstaff in Arizona, joining the high-altitude training group of old friend Stephen Haas, initially with no other ambition than to get back running again.

Things soon changed. As the quiet weeks rolled into months, Ó Lionáird kept turning back the clock, before stepping back onto the track this week with the sort of interval speed work that helped him qualify for the 1,500m at those London Olympics, running 3:34.46 in 2011.

“It was one workout, a week or two back, when coach Haas said to me, ‘the talent is still there’, and that was a sort of light bulb moment,” he says. “I’ve laid the foundation, still need to work on a little more endurance, and in many ways the lockdown, and the extension of it out here, has been lending itself to all this, as if we’re still in some sort of Twilight Zone.”

Before returning to the reality of competitive sport, however, Ó Lionáird had to re-register with the Sport Ireland anti-doping testing pool, having signed off after his retirement, then sit out another six-month period on the whereabouts rule, before being allowed to compete again in national or international competition, according to the World Anti-Doping Agency (Wada) Code. It means he can’t race competitively again until October 8th.

Part of the issue for Ó Lionáird is that he still hasn’t yet been tested - not even once: “It’s a little frustrating, but to be fair, even if I’d don’t necessarily agree with the rule, you have to roll with it. I actually wish I was tested, because otherwise it feels like this whole six month period is a waste. I do feel like I’m on some sort of ban, even though I’ve never failed any test.

“I did put competing in Nationals out there, but it was more multi-faceted than just saying I would have come back. Six weeks ago, there was no way I would have been ready to race on the track, it wasn’t in the plan. It was also a way of saying that there is a part of me now, given the fitness I have, that would have loved to come home and race.

“Still I don’t think it is fair either to say I’m missing the Irish championships just because of this ban. I’m also in one of the worst-hit parts of the US with Covid-19, so coming home may not have been the responsible thing anyway. I am eager to race, but the big goal is to be ready in December, to hit the Olympic time. I’m aware all I’ve proven for now is that I’m good at running workouts, I’m not getting ahead of myself, but I’m at the point where I think something interesting is going to happen.”

It will be also interesting to see how the sport awakens from its deep sleep over the coming weeks, and the sort of performances athletes might produce at the resumed Diamond League meetings against the backdrop of such limited drug testing over the last six months. Tokyo qualifying doesn’t begin again until December 1st, so why be seen to peak so soon?

Joshua Cheptegei, from Uganda, running 12:35.36 in Monaco on Friday night, taking two seconds off the world record, certainly got things off to an incredibly fast start.

Ó Lionáird is doing the right thing, sitting out his six months, and yet seems to be penalised for that at a time when some other athletes, who have gone the best part of the last six months without being tested, are free to compete.

Other sports have no such concerns, at least not for now, and none less so than the GAA. Sport Ireland can only carry out anti-doping tests on senior inter-county players either out-of-competition (at collective training) or in-competition (on match day), and with all inter-county activity suspended since March 12th, and not resuming until September 14th, players don’t have to worry about being tested or indeed their whereabouts, almost exactly six months to the day since the suspension.