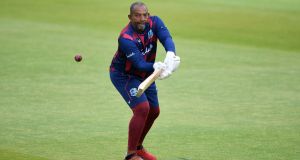 West Indies head coach Phil Simmons has entered self-isolation after attending a funeral but fast bowler Alzarri Joseph said it would not hamper the team’s preparation for the three-test series against England.

Simmons has been self-isolating in his Old Trafford hotel room since attending the funeral on Friday and has to clear two Covid-19 tests before he can join the squad on Thursday.

“We have our jobs to do - we have our preparation to keep going with. We have a very big coaching staff here that are very supportive of each other, so that’s not really a problem for anyone.”

Assistant coaches Roddy Estwick and Rayon Griffith will oversee the team’s second warm-up match, which begins on Monday, before the July 8th series opener in Southampton.

Joseph is set to join skipper Jason Holder, Kemar Roach and Shannon Gabriel in a four-pronged pace attack and the 23-year-old was fine being perceived as the weak link.

“Obviously those three guys have a lot more experience than I do,” he said.

“I’d think more often than not, teams would see me as the weaker link. I think my job is to come in and just back those bowlers and keep the pressure on.”

“I could use it as an advantage - I know my abilities and they (England) might not know. But once I turn up on the day and get the job done, I know I can get on top of any opponent.”