Freeze-dried food, saltwater hands and talking in my sleep have become the norm 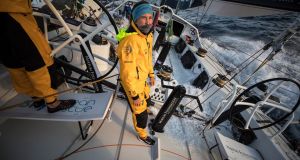 Much to the amusement of the others on board Turn the Tide On Plastic, I’ve been giving orders as if I’m on watch and not resting.

Yells of “Trim-on!” and “Bear-away four degrees” is very entertaining for everyone else so I must be dreaming about sailing the boat in my sleep and telling everyone else what to do which I wouldn’t normally be like in reality.

But helping each other out is part of crew life and I’ve taken on the role of looking after everyone’s diet. If I can, I get up early and have Bianca and Francesca’s food waiting for them when they come off watch as little things like that make a big difference to someone’s day.

What I can’t wrap my head around is how fast the day goes by.

Now that we’re in a settled period in open ocean with plenty of straight-line routing, we’re not called up on deck from off-watch as often. After three four-hour watches daily, that means 12 hours of rest but it just disappears once food preparation and meals are sorted out.

I have found time to read my Kindle book on my iPad before sleep. So far, I’ve managed two and half chapters before conking out asleep.

But what has been really great is having a little bit extra time to send some emails to my family and I got a lovely long reply from my sister Claudine that had me in stitches so was a great distraction from the intensity of the racing.

But apart from that, all your day is simply sailing and sleeping. However, now that I’m getting enough rest I’m able to do well with the sailing.

The last week has been great, nearly all on port gybe (wind on the left handside of the boat) with just a few manoeuvres needed so it’s a constant cycle of grinding, trimming or steering.

I’ve learned how to steer the boat better – once I stopped trying to treat it like a 65-footer and more like my Laser; it became much easier and a lot more fun.

We had a discussion about sailing past Rio and I half-suggested that we might divert for a few days for a Caipirinha and chill out on the beach – I could really do with a shower. But it was lovely to sail down the coast before turning eastwards directly for Cape Town and into the centre of the South Atlantic.

We just passed the remote islands of Tristan da Cunha and this morning a pod of small whales popped up beside us plus we’ve seen two magnificent albatrosses so we know we’re pretty far south though not quite into the Roaring Forties.

I’m in my element with around 12 degrees outside – much like Dublin Bay for Laser training – though everyone else reckons its near-freezing.

We’re still locked in a serious battle with Scally Wag for the past week and every 30 miles or so we seem to converge and trade places until we part company again and fall out of sight.

We’re currently blasting towards Cape Town and ideally, we could keep doing this and we’d be there in three days but there a quite a few different weather systems around us so we’re not sure whether we’ll go north or south for the final approach to the leg finish.

The weather has been tricky and not going to forecast so three days would be a bit optimistic but the finish will be over the weekend.

But we’re still within 100 nautical miles of Mapfre, the fleet leader which considering we’ve been racing for more than two weeks is pretty amazing. All in all, I’m pretty positive.

There’s likely to be a light wind patch coming into Cape Town when the boats ahead might slow down and we gain from behind. It all depends on what routing we take so we’ll have to see how that all plays out but for now it’s a bit of a drag race until we get an opportunity to make some gains over the next few days.

The conditions and especially the salt-water effects are starting to show.

My hands have actually improved; they don’t look too good but they’re not painful anymore. They’re constantly wet with salt water and if you’re trimming the mainsail, that means holding onto a high load sheet (rope) for perhaps an hour and a half to two hours and doing that six hours a day really tires out your hands.

After standing a watch on deck, you go below but you’re still wet and because we have a very limited supply of fresh water. We have a spray bottle of fresh water we use for wetting down faces but this is still minimal and you can’t use drinking water for anything else.

After soaking my entire supply, I’m still in last week’s pair of thermal leggings with holes worn into the knees. But I’ve just broken out my fleece top for the first time and that’s nice and toasty and will hopefully last me to Cape Town.

Some fresh fruit and vegetables plus a shower is all I want right now. If I could have those I’d be happy to stay on the boat a good bit longer. But all we have is freeze-dried food, deodorant and these baby wipe things that are like a hand-glove so that’s the nearest solution for showering until Cape Town.

I’m sure I smell fantastic. Did I mention that I need a shower?

Six Nations 2021: This feels like the real start for Andy Farrell’s Ireland 11:00
Chelsea set to sack Frank Lampard and bring in Thomas Tuchel 10:57
Six Nations 2021: Tadhg Furlong and Rhys Ruddock return to Ireland squad 10:43
The Offload: Ireland’s succession issue at 10 on show once more 10:46
All in the Game: Fenerbahce’s Mesut Özil fundraiser 10:00