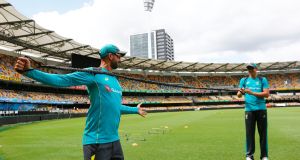 Australia’s Nathan Lyon warms up during a nets session at the Gabba in Brisbane. Photograph : Jason O’Brien/PA

To universal relief the phoney war is coming to an end. As English cricketer Alastair Cook put it: “All the talking is done by Thursday,” though he added that 95 per cent of it passes him by anyway since he somehow seems to survive without being on social media. “But I did see that Luton won 7-0,” he was keen to point out. “Did you all spot that?”

In fact this has been one of the quieter build-ups to an Ashes series, and therefore a tough assignment for those who have been reporting the tour from the start. On Tuesday even David Warner, staring solemnly straight ahead (but only because he had just tweaked his neck) declined to stir the pot. We now know him as “the Reverend”, and it sounded as if he was taking his text from the New Testament rather than the Old, even though he was physically incapable of turning the other cheek.

Edited highlights of his sermon include: “I would love [Ben Stokes] to be here. He is a world-class player…He knows he made a mistake…If he comes I wish him well…I wish everyone well.”

Somewhere along the line the Warner tongue may have been in his non-turning cheek. There were a few verbal potshots but, these aside, little fire and not much brimstone from Australia’s vice-captain.

However, it has become a bit more heated during the last week. First the Australian selectors surprised everyone and copped some flak from old giants such as Allan Border and Shane Warne for the recalls of Tim Paine and Shaun Marsh.

So that helped a bit. Then, out of the blue, Nathan Lyon came to the rescue.

In what seemed like a premeditated onslaught he focused upon how scared the English tourists were four years ago before pointing out that Mitchell Starc and Pat Cummins are faster than Mitchell Johnson ever was in 2013, while Josh Hazlewood is “the best bowler in the world”.

That was more like it, though this all left Cook chuckling and seemingly bewildered. “I bumped into Nathan this morning and we had a lovely 10 minutes chatting about our kids and stuff like that.”

Lyon’s interview was remarkable. Back in the macho days of Jeff Thomson and Dennis Lillee we never heard from Ian Chappell about how scared the Poms were. But in the delicate 21st century Lyon did not hold back in a manner that might easily have antagonised England’s tourists.

It is one thing to say that X “can’t cope with the away-swinger” or Y “can’t pick the googly”; it is quite another, and far more provocative, to accuse opponents of being scared. Rightly or wrongly this implies a major character defect, which is deemed to be so much worse than technical incompetence.

Of course, there is a grain of truth in what Lyon was saying. Four years ago England were not just undermined but also flustered (I like a euphemism) by the pace of Johnson.

For the first time in decades one could sense fear among the batsmen either of being hit, which was the case among the lower order, or of being out of control at the crease which in some ways is even more frightening. That was the experience of Jonathan Trott. This made for a spellbinding spectacle, albeit a macabre one for English fans.

Wittingly or not, Lyon has highlighted the critical element of this series: whether England can cope with the first-choice Australian attack. They will be tested by pace at the Gabba, and objective observers of Australian cricket (they exist, I promise) confirm that Cummins and Starc can indeed propel the ball faster than Johnson did. Whether this pair will be so intimidating is another matter.

In 2013-14 there was no escape from Johnson. With his skiddy action plus an awkward angle of delivery, England’s finest could not find a way to deal with short balls delivered with such menacing accuracy. Increasingly fretful batsmen could not hook, defend, sway or duck convincingly.

It is not necessarily the case that Starc and Cummins can direct their bouncers with the same devastating effect. But it will not take them long to try. Starc will pitch the ball up initially, for he is at his most dangerous when he swings the new ball, but the next port of call for him and Cummins will be to test the tourists with some bouncers.

England have been preparing for them. But it is a different proposition at the Gabba in front of 40,000 pairs of hostile eyes than it is in a private net against Mark Ramprakash and his ball-thrower.

The onus is on Cook to show the way. “They are good bowlers with good records, but they don’t do anything we haven’t seen before‚” he said. “You want to challenge yourself against the best but it doesn’t get any easier. Whoever you are, you always start on nought. That’s why Thursday is so exciting.”

England’s strategy is to exploit the fact that Australia have opted for a four-man attack. They have to keep the Australians in the field a long time, which, as Cook pointed out, can bring its rewards later in the series.

Initially this means blunting those pacemen. Then comes a conundrum that centres upon the unlikely provocateur, Lyon. In a four-man attack Lyon may be required to bowl around 25 overs – even on the first day. If he is successfully attacked Steve Smith has nowhere else to turn, and the burden on his pacemen increases.

But how brave can England be against an Australian spinner, once routinely derided but who is now the seventh highest wicket-taker (with 269) in their history? The gamble on a four-man attack is greater than the recalls of Paine, Marsh or the selection of debutant Cameron Bancroft. Even so, Australia begin the match as strong favourites.

At least England arrive in a better frame of mind than the splintered side of 2013. They genuinely seem to be adjusted to the absence of Stokes, unless they are bluffing brilliantly. They have long since decided their best available team and that seems to include Jake Ball rather than Craig Overton now that Ball has made a semi-miraculous recovery after twisting his ankle in Perth. And the weather is obliging. To the disappointment of the Reverend the oppressive humidity that often accompanies Brisbane tests has been absent and there is the chance of some rain interrupting the drama. So perhaps the Gabba may not be quite the ferocious cauldron of seasons past. However, it is not going to be easy.

Cook pragmatically observed that a draw would be a good start to the tour – before adding hastily that England would be aiming to win.

“One day they will lose at the Gabba”, he said though the last time this happened against any opposition Scott (Jason Donovan) and Charlene (Kylie Minogue) were getting married in Neighbours, an episode watched by 20 million in the UK in 1988.

An English victory at the Gabba would not attract such a massive audience but would be even more entertaining.