Conor McGregor appears on US talk show Conan and demonstrates on host Conan O'Brien how he intends to defeat Nate Diaz in his upcoming UFC fight. Video: Conan/TBS 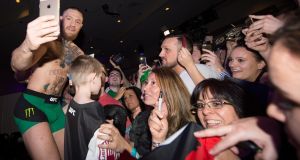 Conor McGregor taking a selfie this week with fans at the Jabbawockeez theatre in Las Vegas, Nevada. Photograph: Brandon Magnus/Zuffa 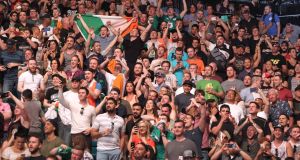 A large Irish contingent at the Conor McGregor v Nate Diaz weigh-in ahead of UFC 196 at the MGM Grand in Las Vegas, Nevada. Photograph: Raymond Spencer/Inpho

It started as a trickle, the odd Tricolour appearing along the strip early in the week, but by Thursday night a flood of fans had again arrived in Las Vegas to see Conor McGregor fight.

Never mind the fact that his welterweight bout against Nate Diaz that tops the card at UFC 196 isn’t even a title fight. They are still coming to the Nevada desert in their droves.

Many are here for the second or third time. The last time they came was to see McGregor knock out José Aldo to claim the UFC featherweight world title – add up the cost of flights, hotels, food and drink and it was a lot of money to see 13 seconds of action.

But with McGregor and the UFC the action doesn’t only happen inside the octagon. All week fans are welcome to attend open training session and weigh-ins, cheering their fighter and jeering his or her opponents.

Sometimes, after the formal events are over, they get their wish and McGregor walks among them, signing autographs and taking pictures and holding kids up while proud parents take their photographs on iPads and mobile phones.

Sometimes they wait patiently to no avail as McGregor is spirited away from the bowels of the MGM Grand hotel back to his base so he can eat and train and rest in peace.

For Ryan Logue from Derry it is his sixth trip to see the McGregor fight. A boxer in his youth, he finds McGregor’s appeal simple. “You know what? He’s full of it. But I like the fact that he backs it up.”

Dressed in a black, white and green McGregor T-shirt, Mark Patrick Rohan Jnr from St Louis in Missouri has actually upped sticks and moved to Las Vegas to be closer to where the fights happen, and he dreams of McGregor stopping by his house some day, as he recently did when he saw a cardboard cutout of himself on a balcony in LA.

Clutching a boxing glove he hopes to get McGregor to sign, Rohan explains the appeal.

“It’s the way he talks, his image. He represents Ireland, he’s what the majority of people want to be right now.”

But of all the fans who come it is the Irish who are the most visible and the most vocal.

Wrapped in Tricolours and cheering and singing for their man, they stand in throngs in the walkways between the slot machines at the MGM Grand, where Saturday night’s fight will take place.

In the venues where the media activities take place they howl and heckle, chant and sing, relishing the chance to come all the way out to Las Vegas and be part of the show themselves.

Regardless of the outcome of Saturday’s fight, some have already booked to return to Vegas on July 9th for McGregor’s next fight at UFC 200.

McGregor says that UFC boss Dana White has said he is too big to fight in a 9,000-seat indoor arena in Ireland.

If McGregor can win on Saturday and snare another belt at UFC 200, it will be hard for White to ignore him.

Despite McGregor’s undisputed status as the top name in the sport right now, Ryan Logue does not think the Croke Park fight will ever happen.

“I think Dana White is afraid of it. He’s afraid that it might rain.”

No matter. Logue, like many others, is prepared to keep coming west.