Monkstown down three international players as they face Belfast Harlequins away 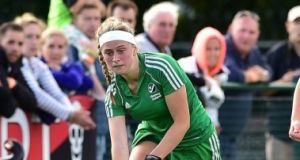 The Hockey League finally gets under way on Saturday after a two-week delay, caused by the impasse between Irish Hockey and the Umpires’ Association, with defending champions UCD opening their campaign against Cork Harlequins at Belfield.

The students had a near perfect season last time around, winning the Irish Senior Cup, Hockey League and Champions Trophy, and retain the bulk of the squad that sealed that treble. Their one loss of note is Gillian Pinder who has moved to Pembroke Wanderers, but they have been joined by two other internationals – Ellen Curran, the former Monkstown player who made her senior Irish debut last year, and Bethany Barr, the Irish under-21 who returns from America after a spell at Liberty University in Virginia.

Harlequins, who finished third in last season’s Hockey League, are strengthened by the return of Julia O’Halloran and Emily O’Leary from Railway Union and Ulster Elks, respectively, and also expect to have former Irish captain Cliodhna Sargent available again after having a baby.

Monkstown were beaten to both the Hockey League and Champions Trophy by UCD last season and their hopes of going one better this time around haven’t been helped by the departures of three internationals: Nikki Evans, who is now playing in the German league with Hamburg, and Chloe Watkins and Anna O’Flanagan, both of whom have joined Bloemendaal in the Netherlands. Sadhbh Hoban Logan and Georgina Spillane have, though, joined from UCD.

Monkstown start their campaign away to Belfast Harlequins who should be a stronger outfit this season having added two internationals, Zoe Wilson (from Harvestehuder in Germany) and Lizzie Colvin (from Loreto), to their ranks.

Pembroke, who are away to Ards, have also strengthened through the additions of Pinder and Emily Beatty, who was playing in Belgium last season, while Pegasus, home to Trinity, have recruited Ireland’s most-capped sportswoman Shirley McCay from Ulster Elks. Loreto and Railway Union, meanwhile, meet in their opening fixture at Beaufort.